Why Maguire-Varane is the perfect CB duo It’s hard to ask United fans to relax about Varane coming to the Theatre of Dreams for his medical this week. It’s hard to ask them not to get over-excited about seeing him in a United shirt soon. It’s not something to relax about at all. The prospect of seeing two world-class centre backs in Maguire and Varane is nothing short of mind-blowing. Ability-wise alone, it’s a finger-licking thought – putting together 2 of Europe’s best CBs together. But in today’s article,  I’ll try to explain that from a tactical point of view, they are a ridiculously good fit for the system Ole has been trying to perfect for 2 seasons now.

Most modern centre-back pairings operate in a stopper-cover partnership. The stopper (or dog) is the one who aggressively engages in duels with attackers and often steps into the DM area to win the ball early before the clear-cut chance can be created by the opponents. The dog marks the man rather than the space.

The cover CB (or cat) drops to sweep up loose balls, cuts passing angles and contests duels only if his stopper loses/misses. The cover CB marks the space rather than the man. Cats usually cost more than dogs since they are a rare breed.

The relevance for this style of partnership has only increased in modern times as many attackers are adept at dropping in the hole to create (like Firmino, Messi, Kane) as they draw out defenders and create space for their more attacking partners (like Salah, Griezmann, Son) to attack the space. With the stopper-cover setup, the stopper engages the former type while the cover player tracks the latter type to give the team a double opportunity to weed out threats.

For reference, Ferdinand Cover and Vidic Stopper or Ramos stopper and Varane cover or Puyol Stopper and Pique cover would probably be the best examples in recent times.

And if we take some common skills required for a top possession oriented team,

It should also be noted that all pairs aren’t necessarily a stopper-cover system. Many teams don’t operate that way. For example, Burnley under Sean Dyche line up in a classical 4-4-2 and have a deep defence line where both center backs are of the physical duel-winning type and are tasked to win their individual duels. The need for covering and positioning is limited thanks to the deep line while their strengths of aerial presence and physicality are utilised better. Also, many backlines in recent years have been a back 3 in Europe. This blurs the duties further – at times 2 stoppers and 1 cover play (like Conte’s Inter) and at times 1 stopper and 2 covers (like Conte’s Chelsea).

For Manchester United over the last 2 seasons, Maguire is the clear stopper and enjoys stepping into midfield to contest with opponents. His strong frame and heading ability make him a great asset to win the ball early and stop opponent moves while his lack of pace and agility are also made up for when he engages early without giving the attacker a chance to collect the ball and run at him. In contrast, Lindelof avoids the early aerial scruff and drops patiently to pick up the quick poacher or loose ball from Maguire’s duel.

Football is a weak-link sport. This means that a team would suffer if it had weak links. Upgrading the weakest parts of a team is usually the aim since one single good player rarely wins you games alone but a single poor player could cost you games easily. In comparison, basketball is a strong-link sport where upgrading your good player to a superstar could result in you winning a lot more, since a single player earns many points in a team.

For this reason, team building in football usually happens in the format of identifying weak spots and upgrading them to create a more balanced squad. This isn’t always possible though and especially when it comes to center-backs, the chances of getting a well-rounded center-back who ticks all the boxes (fast, strong, technical, consistent and tall) are close to zero. A manager is better off pairing two center-backs who compliment each other so well that together they eliminate any ‘weak link’ between them. This is where a stopper-cover equation really shines. Instead of looking for 2 world-class well-rounded CBs, a manager has a better chance of looking for a world-class stopper and a world-class cover to create an air-tight defence.

With that explained, we now proceed to make two (slightly ambitious) statements.

Ole Gunnar Solskjaer’s team building has been top notch since he took over. Selling players who don’t fit or aren’t good enough and buying/promoting players who fit his system or offer clear upgrades to existing players are the 2 major parts of team building, but it’s not as easy as it sounds. Ole has managed both to a great extent. For 1-2 seasons now, a CB upgrade has been on his mind even after the acquisition of Harry Maguire. His vision for the backline might finally be complete with the addition of Varane.

We will now proceed to explain the logic behind the 2 statements.

Harry Maguire is a world-class stopper

One of Maguire’s best qualities, his aerial prowess, can be summed up with the following viz:

Maguire boasts an insanely high aerial win % of 76% while also contesting a whopping 190 duels. Only Caleta-Car was better at 77% but contested much less. It wouldn’t be wrong to call Maguire the best CB in Europe in terms of aerial prowess. Milenkovic, Mings, Tarkowksi, Andersen, David Garcia round up other aerially strong CBs.

But that’s not the only thing he’s great at. Maguire’s pizza chart is an astounding reflection of his well-rounded qualities and the amazing season he has just had. He’s not only been an aerial monster, but also amazing at progressively passing and carrying. He’s also played with the consistency, leadership and fitness of an elite defender. He is the quintessential CB who ticks all the stopper traits as well as the extra common traits needed for a top team backline.

Raphael Varane is a world-class cover

Explaining why Varane is a world-class cover might be tougher. Unlike stoppers, there aren’t very clear metrics to quickly identify a good cover CB or cat. The fine arts of positioning, sensing danger and marking space to plug gaps so that the need for a duel never arises are not easily quantifiable. That said, we do have things to go on.

Firstly, we can refer to the same aerial prowess viz to quickly highlight one underrated strength of varane that covers usually struggle with: 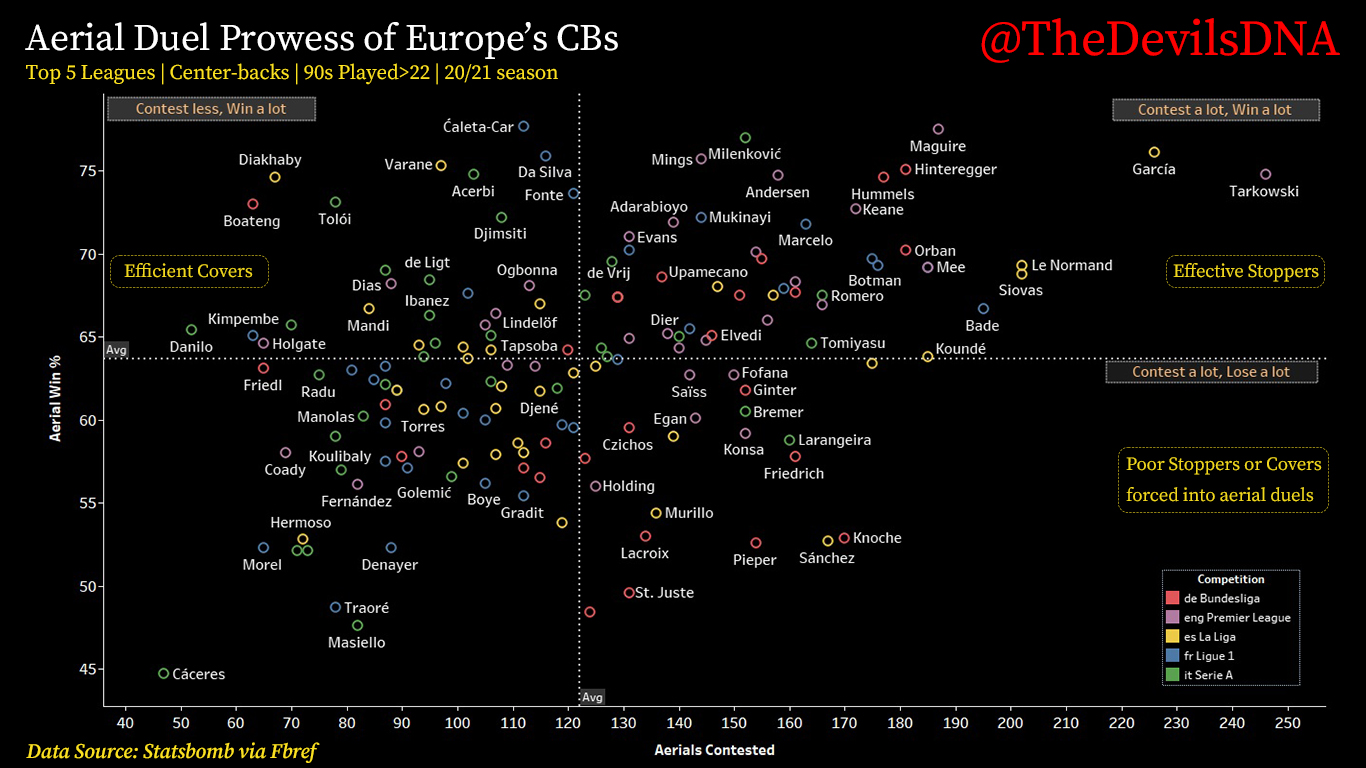 Varane almost matches Maguire’s 76% win rate while contesting ~100 duels. Aerially, that’s a world-class combo. It should be noted that Varane does face lesser duels though. Lindelof’s traits point to a cover CB but he’s been forced into many aerial duels taking him close to the Europe duel average. United will need to protect their cover CB (now Varane) more by keeping the ball better, pressing wide areas to stop crosses & maybe buying a holding DM. Varane has made a few mistakes in the past even in Madrid when he hasn’t been protected adequately.

For Varane’s other strengths, we take a look at his pizza chart: 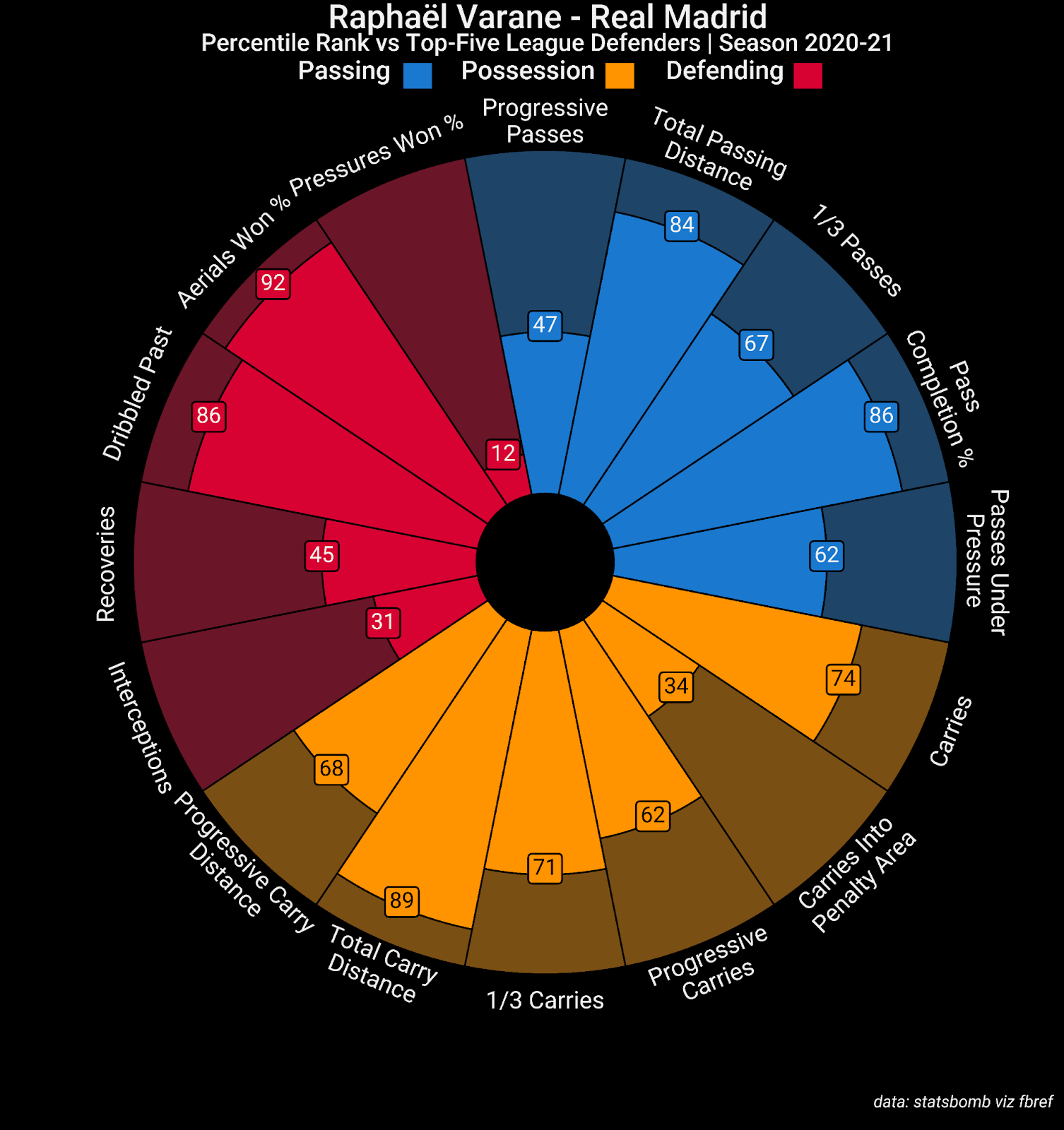 Other than the impressive aerial win % which we covered, we can immediately notice a dribbled past percentile of 86. That is really impressive and a very specific cover CB trait. Cats rarely get dribbled past thanks to their elite positioning, awareness and agility. Varane is a master at that. He jockeys players well until they have nowhere to run and then makes a well-timed tackle. He spots a runner or dribbler quicker than anyone in Europe. Once he does, he has the acceleration, speed and agility to turn and catch that player and not let them get past him.
Fbref’s dribbled past percentile of 86 is actually not a fair reflection because many players with low number of 90s would get ahead of Varane on a per 90 basis. If we dig deeper into the data to filter center-backs in Europe who have played at least 25 90s in 20/21, only 5 players have been dribbled past less than Varane. That is elite.

Going through his other metrics it becomes clear that Varane is a very well-rounded player. He isn’t as amazing at carrying and dribbling as Maguire and as amazing as Lindelof when it comes to passing but he’s just one shade lower at both. Varane is the kind of CB who is a solid 8/10 on everything. Once again, using the weak-link concept explained earlier, that well-roundedness really helps a top team. Lindelof, for example, is a very accomplished center-back in his own right and has formed a good partnership with Maguire in the last 2 years. But the ‘weak link’ in his game, and consequently United’s defence, is his aerial ability. Not having a weak link is more important than having a strong link in football, especially in defence. Even If Varane offers a good upgrade on Lindelof’s aerial ability with a small downgrade on his passing, the overall positive effect for the defence is huge. The defence won’t have any specific weakness that opponents can target. That alone could be the reason a few draws turn into wins and a few semi-finals turn into trophies. United fans will understand.

Stats can only explain so much. The eye test matters a lot, especially when it comes to partnerships. The most simple way of knowing why Varane will work with Maguire is to see what has worked for him so far. He hasn’t won 4 UCLs for nothing. It’s convenient that his partner in these exploits is a player who possibly shares the most common traits with Maguire. Sergio Ramos is the original dog – the aggressive stopper who snuffs out attacks before they begin with his high duel winning ability. His immense leadership at the back and comfort on the ball round up the uncanny similarities with Maguire. Varane cannot hope for a more suitable replacement to extend his career’s success. With Ramos off to PSG, partnering Maguire might be the fastest way to form a UCL winning pairing once again.

We highlight Varane’s movement as a cover and what he is capable of doing with Maguire by illustrating what he has done in Madrid consistently.

In the above example, Varane lets his right-back make the tackle on the oncoming dribbler first jockeying and surveying the result. The moment the attacker gets through, Varane creates a tight angle to corner him and his timing is so good that he can almost walk away with the ball after a heavy touch by the attacker.

In the above scene, Varane at the center of the pitch keeps his calm even in a final ball situation as he waits for the right moment. He notices the striker bursting through the center with a well-timed run that beats Ramos easily. Varane then covers the path to the goal in lightning-quick speed and once again times his block with the touch of the attacker to clear away the danger.

I could go on and on about the numerous times Varane uses his awareness, agility and speed and times his tackles/blocks to win the ball right after an attacker’s touch. But I guess United and EPL fans will soon be able to witness such moments.

In conclusion to this article, if an elite stopper-cover system is what United have been dreaming of since Vidic-Ferdinand, then it might not be possible to find two better peak CBs (both exactly 28 years old) for either role than Harry Maguire and Raphael Varane. A dream pairing of one of Europe’s best stoppers and best covers might just be what’s needed to bring to reality the dreams of a major trophy United fans have been harbouring for almost a decade now.