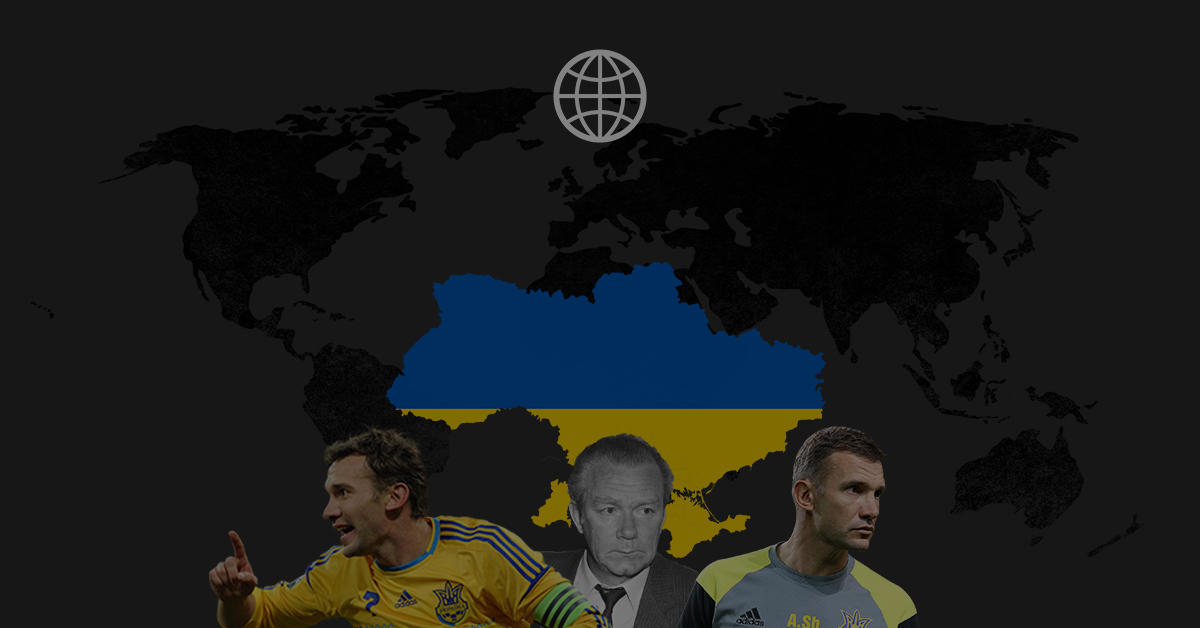 Football Around the World: Ukraine and it’s ‘football of the future’

A country marred by controversies and disasters when under control of the USSR, a small revolution started on the Ukrainian soil which has influenced football a lot, even to this date. And it all started with one man, who completely changed the face of football in USSR (and Ukraine post USSR’s breakdown)- Valeriy Vasylyovych Lobanovskyi, who put Soviet football at the footballing map; both at Club and International Football level with his multiple spells at FC Dynamo Kiev and USSR’s national team.

Valeriy combined football with mathematical calculations and Sports Science to improve the performances, both as a full-time professional player and later on as a coach. He made his debut as an 18-year old player for his boyhood club, FC Dynamo Kiev. He spent 7 years at Dynamo Kiev where he formed a lucrative partnership Valentyn Troyanovskyi on the flanks. From 1960 onwards, he was a full-fledged member of first team and with his unorthodox style of play, he helped his club win Soviet Top Division in 1961, becoming the first ever club not from Moscow to win the title. He spent 7 good years at Dynamo Kiev before leaving for brief spells at Chronomorets Odessa and Shaktar Donetsk.

During his playing career, he became famous for his ability to accurately deliver curling deliveries from set-pieces- often Lobanovskyi was able to score the goal directly from the corner. He had regularly been working on these shots during training sessions, using Magnus effect and his own calculations. The Soviet press often used to compare him with Brazilian forward Didi who curled the ball in a similar way at the 1958 World Cup.

He was regularly invited to the national team, but due to strong opposition (at the time there were many top-level left-wingers in Soviet Union like Mikheil Meskhi, Anatoli Ilyin and Galimzyan Khusainov) was able to play only two international games, against Austria and Poland.

He hung his boots at the age of 29 years, after scoring 71 goals in 251 matches at club level.

One year after retiring as a professional football player, Valeriy joined FC Dnipro Dnipropetrovsk as a coach, in 1968. He took the team from 3rd division to the 1st division in a matter of 3 seasons. In the club’s first season playing at top most level in Soviet Russia, Dnipro ended at 6th position- just 2 points short of a ‘silver medal’.

Dynamo Kiev moved in to get him as first team manager and he started his first spell at the club which lasted till 1982 and made Dynamo Kiev a force to be reckoned with at domestic level and even at Continental stage- the club from Kiev became the first Soviet club to win an European Trophy when Dynamo Kiev won the European Cup Winners’ Cup in 1975, defeating CSKA Sofia, Eintracht Frankfurt, Bursaspor and European Powerhouse at that time- PSV Eindhoven on it’s way to the final, before defeating Hungarian side- FK Ferencvaros in the final with a comfortable score line of 3-0. During the tournament, the club won 88.88% of it’s matches, a record which stood for a long time before it was beaten by Bayern Munich in 2019-20 edition of UCL.

This turned out to be a successful year for the Soviet club, since Valeriy Lobanovskyi was co-managing the team with his former team mate- Oleh Bazylevych. Oleh was the theorist, Valeriy the trainer. The duo started what was to be known as the “away model”- playing defense minded football in 2nd leg of Knockout tournaments after getting a lead on aggregate in first leg if the match was at home ground. Then came the icing on the cake, the Kiev team beat the European Giants and current European champions- FC Bayern Munich in Super Cup. The duo ended up winning the World Sports Coach of the year award. The duo then served as coach of USSR’s senior team for 2 years before being sacked. A return to Dynamo Kiev was on the cards for Valeriy in 1984 and then co-managing the national team from 1986-1990 with USSR team reaching final of Euros 1998. But the Dutch team led by Marco Van Basten ended up as winners with Van Basten scoring ‘that’ goal in the final. A lucrative offer from UAE National team saw him pack his bags for Middle East where he managed for 6 years before returning back to his native Ukraine to start a third stint at Dynamo Kiev. In 1997. The team had fallen off the cliff in his absence. But with his appointment and a sudden resurgence of youth prospects in the club ranks, the club started making strides in Europe once again. Valeriy promoted a young Andriy Shevchenko to senior team- the highlight being a hattrick of goals at Camp Nou, defeating the Blaugrana side 4-0 in 1997-98 UCL group stage. The group comprised of Dynamo Kiev, PSV Eindhoven, FC Barcelona, Newcastle United in which the Ukranian side ended up as winners, reaching Quarter Finals but were defeated by the Italian Giants- Juventus. Next season, the team bettered their performances in UCL, reaching semi finals of the competition after defeating the reigning champions Real Madrid 3-1 om aggregate in Quarter Finals.

To this date, Dynamo Kiev remains the only team not from ‘top 5 leagues’ and Dutch, Portuguese and Russian leagues to reach Semi Finals of UCL. Despite losing Andriy Shevchenko, Kakha Kaldaze to AC Milan, club captain Oleh Luzhnyi to Arsenal and striker Serhiy Rebrov to Tottenham Hotspurs; the club still performed at top level.

Lobanovskyi suffered from ailing health ever since he returned from Middle East and suffered a heart attack in 2001 due to which he missed many away games in continental competition due to flying restrictions. On 7 May 2002 during Dynamo Kyiv’s game against FC Metalurh Zaporizhzhya, Lobanovskyi fainted and was hospitalized with a stroke. Lobanovskyi went through a brain surgery and his health was rated as critical. The press, which regularly monitored Lobanovsky’s state of health, wrote that there was hope, but Valeriy Lobanovskyi had not regained consciousness His heart stopped on 13 May at 8:35 pm. At the Champions League final in Glasgow two days later, UEFA held a minute’s silence in his honour.

From introduction of Analytics to Sports Science to tactical evolution of the ‘Beautiful Game’, the enigmatic manager influenced the game in various ways. Valeriy saw the game as a system of 22 elements divided into 2 sub-systems of 11 elements. The nuance that Lobanovsky considered the most interesting and important was that the efficiency of the subsystem will always be higher than the sum of the efficiencies of its individual elements. Lobanovskyi insisted that the training process should be modeled, and fragments of future actions on the field should be practiced. According to Lobanovskyi, team coordination was an outdated concept – each player goes out and does what is needed at this time, and how he does this depends on his skill, training, and ability to express himself. But the structure of the game, tactics should not suffer from who acts as a performer in that particular moment.

Many people who worked with him over the course of his career, may it be players or coaches always saw him as a great Psychologist. He was not only a great tactician but a great ‘manager’ too. In terms of tactics, he lined up with a 4-1-3-2 formation on paper with players performing multiple roles and a very fluid transition from defence to attack. The underlying principles of his game were somewhat similar to “Totaalvoetbal” or “Total Football” which was developed by Rinus Michels in same era but the Ukranian focused a lot on physical fitness and diet of the players too so that everyone is in top condition in order to battle fatigue and keep maximum output and efficiency. He stressed a lot on efficiency and it was evident with his success- being 2nd most decorated manager after Sir Alex Ferguson.

Pressing was always a key element of Lobanovskyi’s teams. The main goal of pressing was to create situations of numerical superiority for Dynamo players where the ball was, and deny opponents both space and time for the right decisions, thus forcing them to always play the game at Dynamo’s pace. The trademark Dynamo counter-attacks would start with a player dispossessing his opponent in midfield, then immediately playing a quick long ball either to the forwards or the advancing full-backs, so as to catch the opposition unorganized. Lobanovskyi always stressed the importance of the first seconds of an attack after winning the ball, as it is in these seconds that the opposition is less ready to defend in an organized manner. Pressing was a collective effort, and whenever a player moved up the pitch, a teammate covered his position. In this way Dynamo minimized the threat of having to face a counter-attack by the opponent in case the ball was lost.

He also relied on defensive stability as well. His teams were infamous for defending leads in away fixtures and relying on defensive superiority in those situations and exact opposite approach in home fixtures of 2-legged ties.  In addition, they also used tactical fouling to prevent counter attacks: by fouling around the halfway line Dynamo’s midfield could get behind the ball to defend. His preferred formation of 4-1-3-2 used to take the shape of 4-3-3 in attack and 5-3-2 in defence. Dynamo’s defending was usually organized as a mixed zonal-and-man-marking system; players would usually defend zonally yet the opposition’s best player was in most cases man-marked by a Dynamo player who tracked him back whenever he went.

Many modern-day managers have been influenced by his management skills. Ralf Ragnick, who once played against Valeriy’s Dynamo Kiev side in late 1980s was influenced a lot by their ‘counter pressing’ tactics which he has tried to emulate in his managerial career over the years. Many other German managers have learned from Ralf Ragnick over the years, most notably Julian Nagelsmann and Thomas Tuchel who have also picked up many traits of the Ukranian managerial style.

After his death, A.C. Milan won the Champions League in 2003 with Andriy Shevchenko in the team. After the victory Shevchenko flew to Kyiv to put his medal by the grave of his former manager. Andriy Shevchenko is himself managing the Ukranian National Team in present day, trying to emulate the teachings of his mentor and Andriy is blessed with arguably the best prospects which can prove to be the “Golden Generation” of the country’s football team post it’s separation from USSR.