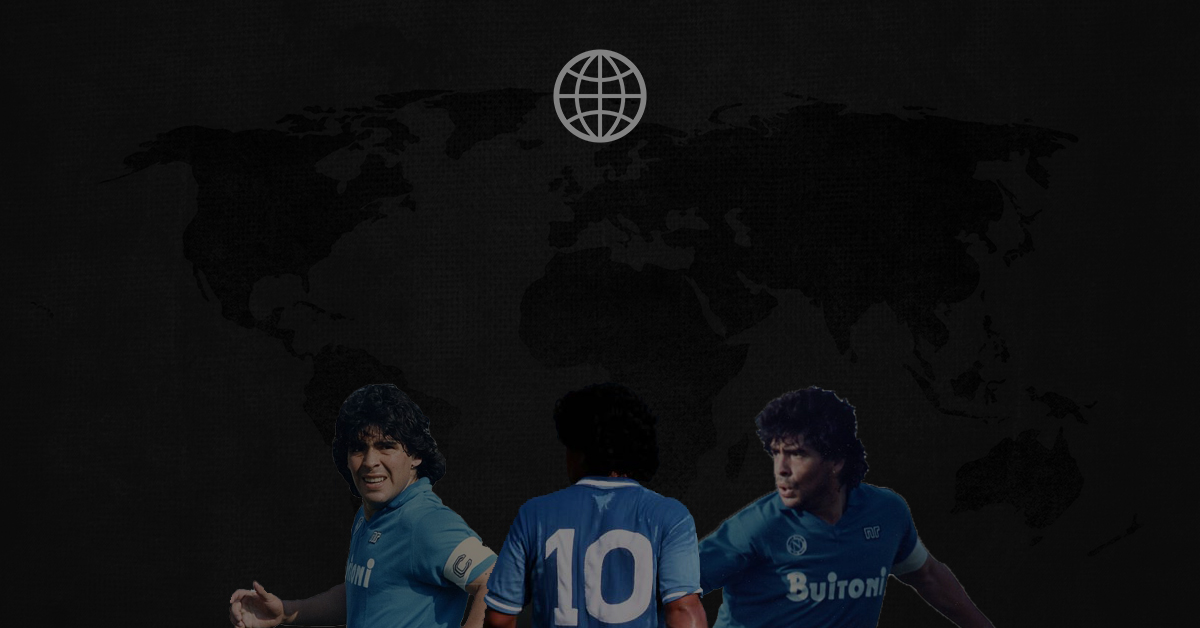 A mentality among Neapolitans has always existed- of waiting for their saviour. The people in the city always felt that they have been robbed by the people from ‘North’ and someone will come to rescue them. A historic city situated on the Amalfi Coast and looked over by Mount Vesuvius, it has been a centre of attraction in every known era of history. It has been a centre of arts, education, religion, politics in the past and it eventually became a centre of football too, when the God truly blessed city in late 1980s- not by Saint Gennaro (the City’s patron saint). But it was blessed with a certain Argentinian who just wanted to enjoy the beautiful game. This Argentinian then went on to defy the odds and became the saviour the city and it’s people always wanted. With his achievements, he became a folklore.

This Argentinian is none other than Diego Armando Maradona. After starting off his career as a 16 year old professional with his boyhood club Argentinos Junior, he then switched to Boca Juniors and eventually the European elites came calling in. FC Barcelona paid a world record fee for the dimunitive attacking midfielder. But his time in Barcelona was marred with injuries, controversies on and off the field. A talented youngster born to play football looked out of sorts with life in Europe. Then in summer of 1984, one of the most shocking transfers took place which took entire footballing world by storm. Napoli came in with another world record bid and within few days, Diego swapped an economically rich city of Barcelona with one of the most poor, if not the most poor cities in Europe- with ‘Napoli’. This was a move which took everyone by storm. Many were shocked that how a perennially underachieving club like Napoli came up with such offer while many people in the city cannot even afford basic amneties along with many criminal families creating havoc with their illegal activities within the walls of this holy city. But this was the start of a journey which will be etched forever in the hearts of people of Naples and his tales be sung for many generations to come.

Maradona’s arrival at the San Paolo in 1984 from FC Barcelona can be seen as the catalyst for Napoli’s ultimate success, but it took the club 3 years to win laurels. Diego was the the most important piece of that puzzle. The ambition showed by the perennial underperformers from the south of Italy eventually proved to be fruitful and put the holy city of Naples on the pantheon, becoming the first club ever from South of Italy to put a fight against the richer clubs from Northern Italy and deliver a ‘Scudetto’ for the ‘Partenopei’.

The Neapolitan side finished at 8th position, 10 points shy of eventual and shocking champions Hellas Verona in his first season at the club. His brilliant form in 1985-86 season took Napoli to 3rd place with him ending up with 11 goals, taking this form to the FIFA World Cup (and rest is history as we know it). Going into his 3rd season with the club, the missing pieces in the puzzle finally were filled and it clicked. Coached by a fiery but pragmatic Ottavio Bianchi who won plaudits by taking Atalanta from 3rd division to Serie A a few years back. The club was led by ‘El Diego’ and hometown hero Ciro Ferrera with new signings of Fernando De Napoli and Andrea Carnavale also clicking instantly.

De Napoli along with fellow teammate Salvatore Bagni ran the Midfield which allowed El Diego to create his magic further up the field. Along with Carnavale and Bruno Giordan, El Diego contributed to 10 goals with further contribution of 8 goals from Carnavale and 6 goals from Bruno Giordan which made up of a good chunk of overall tally of goals scored by the team. The faithful supporters of the club became the ’12th man’, supporting the club and their main men through thick and thin. San Paolo became a fortress with the club going unbeaten at home in 1986-87 season of Serie A. Napoli recorded 2-1 wins against fellow Scudetto rivals Juventus and AC Milan, both home and away which helped them catapult to 1st place on the table.

Then came the date: May 10th, 1987. A date forever etched in the history of the club and the city. “The world had changed. The noisiest, the most crowded city of Europe was deserted”. These were the words of Italian anthropologist Amalia Signorelli when describing the state of the city in early hours of May 10th, 1987. In the shadow of dormant Mt. Vesuvius, the city would eventually erupt as the club secured their first ever league title in their then 61 year old history. This was the start of a fairytale journey of El Diego. Napoli further won 4 trophies including UEFA Cup against VfB Stuttgart in 1989 and another Scudetto in 1990 followed by Coppa Italia and Italian Super Cup. This period of 6 years was the most successful period in club’s history.

A city which used to be a laughing stock in the eyes of rest of Italy ended up defying odds. In 1990 WC (which took place in Italy only), Maradona led Argentina and Italy were hot favourites to win the title. San Paolo hosted to one Semi Final and with such small odds, the 2 favourites ended up playing each other, in Naples. That Azzuri team had the representation of 4 players from Napoli in their starting XI, another big achievement for the city. After winning everything there was to win with the club and his constant off the pitch struggles with substance abuse, Diego’s time in Napoli eventually came to an end in 1991. The ‘messiah’ departed and the city couldn’t recover from this. One person wrote, the day after his departure, wrote on the walls of Forcella quarter: “Diego Facci Angora Sognare” which meant “Diego, make us dream again”