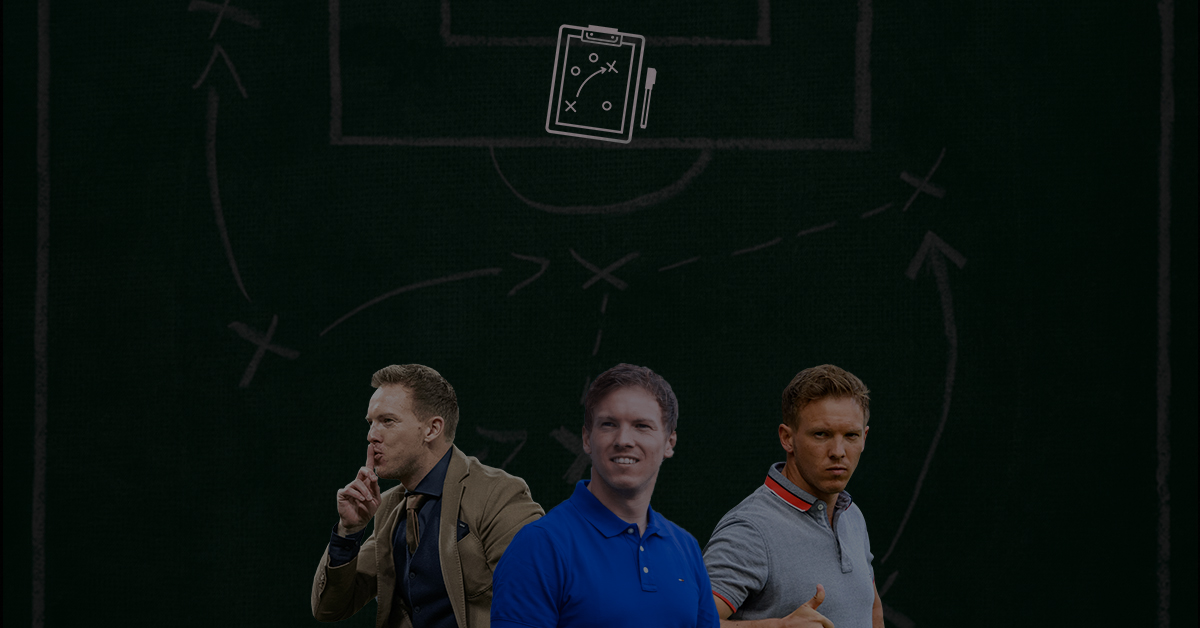 “Football is 30% tactics and 70% social competence”. The young manager is a hit in both aspects, may it be at FC Augsburg where he worked with current Paris Saint Germain boss Thomas Tuchel, may it be at TSG Hoffenheim where he learned from Ralf Ragnick and Huub Stevens. Despite being 32 years old, he has earned plaudits from even the most experienced managers in the game. Nicknamed ‘Baby Mourinho’, he is a fearless guy when it comes to taking risks. From opting to choose a highly defensive structure in his debut season at Hoffenheim to choosing a complete opposite structure in his following season, Julian Nagelsmann changes his tactical setup depending on the need of the team and the opposition he faces.

At RB Leipzig, he has again opted to prefer a high intensity counter pressing, counter-attacking footballing structure loosely based on the principle of ‘Totaalvoetbal’, with players performing multiple roles in the team, right from defense to attack. Players with good technical ability and versatility like Dani Olmo, Marcel Sabitzer, Christopher Nkunku, Tyler Adams, Emil Forsberg, Nordi Mukiele, Lukas Klostermann, Marcel Halstenberg make sure that this ‘unpredictable’ nature remains in their every match. Nagelsmann prefers to use the ‘space’, hence relying on width through his wingbacks and the ‘half space occupation’ through his wingers who like to cut in and take central role or the most advanced midfielder tasked with the role of playmaking.

Julian Nagelsmann opted to use a 3-4-1-2/4-2-4 formation in his debut season at RB Leipzig with a ‘floating striker’ in support role (Youssuf Poulsen) and other striker(Timo Werner) pressing the defensive line and making runs in the channels when possession gets turned over. With the sale of pacy striker Timo Werner to Premier League side Chelsea FC, Nagelsmann has switched to a 3-4-2-1 for time being with 2 wingers and a floating striker constantly changing their position in attack. He has also opted to use a 4-2-3-1 on some instances this season. Even with this change in formation, he has sticked to his fundamentals of exploiting ‘width’ and making ‘triangles’ and/or ‘diamonds’ in final third of the pitch, constantly pressing the opposition in a systematic manner and forcing turnovers to counter attack in a fluid manner.

Despite facing some injury issues and new signings still adapting to change of scenario, RB Leipzig sit at 3rd position in the Bundesliga table with 21 points won in 10 matches, courtesy of in-form Dani Olmo playing in multiple positions and performing at top level.

Even though Julian Nagelsmann has some fixed principles on which he sets up his team, his rotation policy is very unpredictable which always gives his side an ‘element of surprise’ and equally capable of a ‘giant killing‘ on their own merit. These group stage matches for last season’s UCL semi finalists have been a good test for both the team and their young, ambitious and hungry ‘managerial wonderkid’.

Just like in their previous encounter, Manchester United will again look to create overloads in the center of the pitch and deploy a systematic manner of counter-pressing to nullify the strengths of Saxony based side. Absence of Fred (suspension) will be a big blow to Ole Gunnar Solskjaer’s plans. Also the absence of Edinson Cavani and Anthony Martial puts entire load of leading the attacking line on Marcus Rashford who himself has been struggling with a recurring Shoulder injury. On the other hand, RB Leipzig will be without Lazar Samardzic (tested positive for Covid-19), Konraid Laimer, Lukas Klostermann, Benjamin Henrichs (all missing due to knee injuries) and Dayot Upamecano (suspension).

With Champions League group stage reaching it’s end, many teams are still in fight to win their places in Round of 16. Both Manchester United and RB Leipzig will fight it out in a ‘winner takes all’ kind of contest when both teams will ‘lock their horns’ on Tuesday. Manchester United despite their brilliant start to current CL campaign (which included a 2-1 win at Parc Des Princes against PSG and 5-0 rout of RB Leipzig) lost their way with a shocking 2-1 loss to debutants Istanbul Basaksehir and a 1-3 loss to PSG due to lack of clinical finishing, still looking to get a minimum of 1 point to ensure their qualification to Round of 16.

Meanwhile, RB Leipzig must get 3 points to ensure their qualification for round of 16 of Champions League. With the match in Leipzig, team’s must win scenario and a previous 5-0 loss to Manchester United (whose away record in Germany has been abysmal) will provide the young German side with all the motivation in the world to step up on the pitch and see off the competition. Such instances of healthy competition are neccessary for every player, manager to test their mettle and become better version of themselves.

A lot is at stakes in this match up which will make it a treat to watch for supporters and neutrals alike. May the best team prevail!