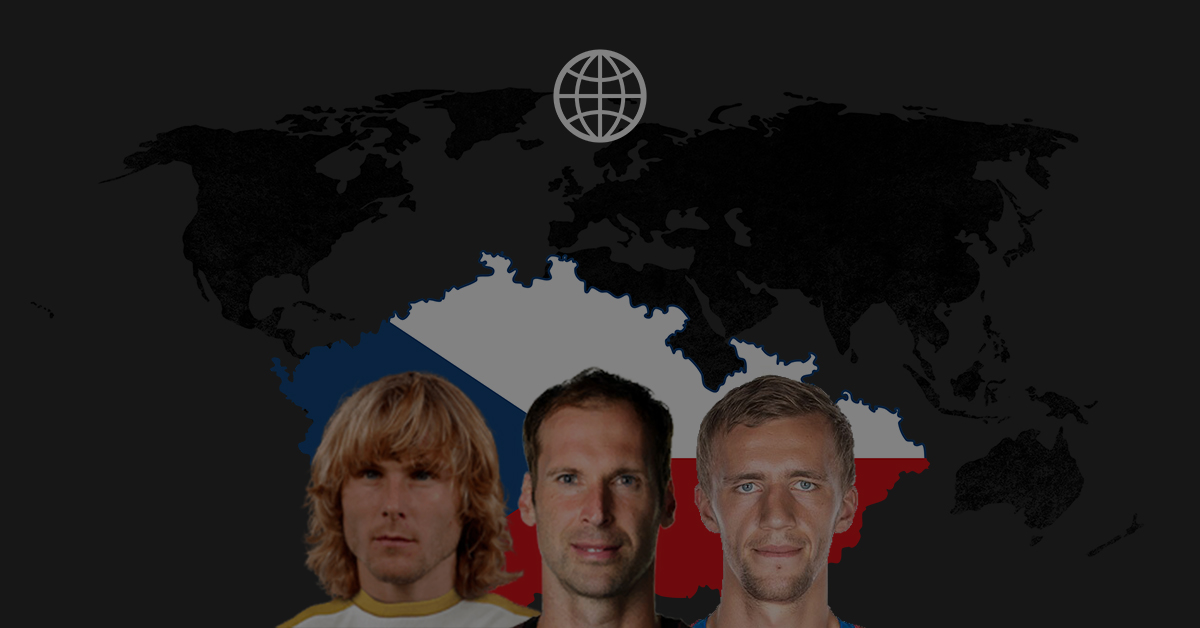 Czech Republic (or Czechia). The moment you hear these 2 words, you get the images of Prague and it’s clamouring medieval era streets and of course Pavel Nedved, Karel Poborsky, Vladimir Smicer, Petr Cech, Tomas Rosicky, Milan Baros and who can forget the man, the myth, the legend: Antonin Panenka.

Once the mighty yet underdog nation of Czechoslovakia boasted some of the most technically astute players ever known to man and their dark horse performances at various international tournaments, highlight being the 1976 Euros where they triumphed against all odds. This was the result of widespread change at grassroot level, also involving the use of Sports Science in the game. The country started churning out very good prospects which made the core of this team.

The West Germany of 1976 was a war-machine, ready to crumble any opposition in their way. Reigning world and European champions, they were still led on the touchline by the brilliant mind of Helmut Schön and directed on the pitch by the legendary Franz Beckenbauer. While West Germany did their part in dispatching the host nation, Yugoslavia in the second semi-final in Belgrade, 24-hours earlier in Zagreb, the Netherlands had been caught off-guard, losing their semi-final in extra-time against the largely unconsidered Czechoslovakia.

Czechoslovakia had twice been beaten World Cup finalists, in 1934 and 1962, and had reached the semi-finals of the very first European Championship in 1960. 16 years between those latter two peaks in achievement, this new appearance at the business end of a major international tournament was most unexpected. Failure to qualify for all major tournaments beyond the 1962 World Cup, apart from 1970 World Cup in Mexico, where Czechoslovakia played in group stage and lost all three matches, had left them looking ineffectual as a football-playing nation. In fact, after becoming European champions in 1976, they would revert to recent type and fail to qualify for the 1978 World Cup. It all made their success of 1976 seem like a mirage.

A 3-0 defeat to England at the Old Wembley had provided Czechoslovakia with a shaky start to their qualifying campaign. It was a game that put the Don Revie led England into a false sense of security. They would win only two further games, both against the group minnows, Cyprus. When the two nations faced one another in Bratislava, exactly one year after England’s victory, there was a complete change of fortunes. Czechoslovakia came from a goal down to win 2-1 and the advantage was now theirs. England finished with just 1 defeat in their qualifying campaign but the group was won on other competitive results against Portugal- heart break for the Englishmen, a party like mood in Czechoslovakia.

During the quarter finals, Czechoslovakia was pitted against USSR. It was the classic Eastern Bloc face-off. The more day-to-day life in Bratislava and Prague was directed from offices in Moscow, the more Czechoslovakia wanted to bloody the noses of those pulling the long communist strings. The Soviet-led Warsaw Pact invasion of Czechoslovakia in 1968 was still very fresh in the mind.  It was a symbolic 2-0 victory that Czechoslovakia obtained in Bratislava during the first leg and a defiant 2-2 draw in Kyiv during the second that took them to the finals in Yugoslavia. Jozef Móder was the hero of the piece, scoring the opening goal in the first game and both of Czechoslovakia’s efforts in the return.

The team waiting for them in the semi-finals was the Netherlands. Johann Cryuff waiting for the fatigued Czechoslovakia team alongside Johan Neskeens, Rob Rensenbrick and Co. Another shocking victory, this time with a score line of 3-1 saw the minnows progress to the final. Was it a case of Dutch becoming complacent, or Czechoslovak organisation and determination definitively winning the day? On a rainy evening in Zagreb, it was quite probably a helping of both as, while Czechoslovakia were an increasingly potent force, Oranje were within the grips of one of their finest ever tournament meltdowns. Getting on the end of Antonin Panenka free-kick, Anton Ondruš, the Czechoslovak sweeper, opened the scoring with a beautifully directed first-half header. However, he then levelled the game for the Netherlands in the second half with a disastrously graceful side-footed volley, which found the top corner of his own goal. The game progressed into extra-time. With a penalty shoot-out looming over, František Veselý worked his way down the right flank, before arcing over a cross to the back post, where it was met by the head of the long-striding Zdeněk Nehoda. Netherlands were then caught in the open for a third time with less than two minutes remaining when, with an almost Cruyfian flourish, Veselý rounded Piet Schrijvers to make it 3-1. In what was an eventful game, Jaroslav Pollák was sent off on the hour mark for Czechoslovakia after mistiming a sliding tackle on the saturated turf. Things even turned sour when Johan Neskeens was sent back to dressing room for a mistimed tackle, culminating the meltdown of the Dutch during the course of 120 minutes. It had been a game played with a great sense of skill and style in torrential conditions. This was confirmed when both sets of players embraced one another upon the final whistle. The respect was there for all to see.

The following day, with a little over 25 minutes of their semi-final against Yugoslavia remaining, Die Teammannschaft were trailing 2-0. But the West Germans dramatically turned the game around for a 4-2 victory after extra-time. Another historic final for Czechoslovakia. The West Germans stood between them and absolute glory. Amidst all of this, the legend of Antonin Panenka was there in the making. A 2-0 advantage was cut down in the very last minute by the Germans with a Bernd Hölzenbein equalizer from a Rainer Bonhof corner. The match went down to penalties and then Antonin Panenka got the opportunity to win an international trophy for his home country, which he did- via a chipped penalty which became to be known as the ‘Panenka’. Francesco Totti vs Netherlands in Euros 2000 semis, Zinedine Zidane vs Italy in World Cup 2006 final. There are countless examples of the Panenka penalty over the years with many such moments coming in most crucial of matches.

What a way to write history on a grand stage and this victory along with various changes made at grassroot level resulted in the rise of a potential golden generation in the late 1980s, early 1990s with clubs like Sparta Prague, Slavia Prague, Bohemians 1905, FK Viktoria Plzen, FK Jablonec, FK Mlada Boleslav seeing an increase in the talent coming through the youth ranks. But the “Velvet Revolution” and the collapse of political order in 1989 brought an end to the various sporting schemes which helped the game thrive in the country. A funding gap was created due to this with influx of money decreasing over the years, which saw the outflux of talent from the country. By 2005, only 5 members of National Team were plying their trade in the country’s top tier league competition and rest of the members were making a name for themselves abroad.

Playing under the new nation of Czech Republic (called Czechia in present day), the so-called exciting prospects took the world by storm in 1996. With the Bosman ruling and its potential game changing impact, a new market opened up for the Czech players to make a mark at club level and Euros 1996 became a stage to show their talent to the world. The underdogs defied the odds and reached to the finals of the competition and were moments away from getting hands on the coveted trophy but an Oliver Bierhoff double (including a golden goal winner) shattered the dreams of this tiny new nation, losing the match by the score line of 2-1. A revenge complete for now unified Germany.

But this tournament opened up the gates to European club football for many of it’s international players with the change in ruling of Non-European players allowed in squad in many countries after the Bosman ruling. Pavel Nedved joined Lazio, spearheading the Czech football revolution for many years and making his mark at Lazio and then at Juventus. Karel Poborsky (and his famous “Poborsky Lob”) joined Manchester United, winning a Premier League medal in his 18-month stay at the club, then moving to Benfica, Lazio and finishing his career in Czech Republic. After losing Poborsky to their arch-rivals Manchester United, Liverpool turned their attention to Patrik Berger, who spent 7 glorious years at the Merseyside club, then moving further south and joining The Pompeys, Portsmouth and then Aston Villa before calling it quit on his career in England, moving back to his native country to see out his last few years of the career.

While the current crop of players made a name for themselves with their performances and winning their dream moves to the Elites, the next batch of youth was brimming on the chance to send shockwaves, in which they succeeded. The U21s of Czech Republic performed very well at U21 Euros, finishing runners up at 2000 edition which was held in Slovakia and winning the competition in 2002, hosted by Switzerland and brought the talent of iconic Petr Cech to the mainstream. Both the editions of competition saw the involvement of many players, who then went to have a good career including the likes of Petr Cech, Milan Baros, Zdenek Grygera, Marek Jankulovski, Jaroslav Drobny, David Rozehnal, Tomas Hubschman, Radoslav Kovac. (Tomas Rosicky was supposed to take part in 2000 edition but he had become a mainstay in senior team by the time qualification rounds for the tournament were over).

Carrying this momentum forward, Czech Republic again gave the European powerhouses a tough fight, reaching the semi-finals of 2004 Euros, setting up a clash with another underdog team in Greece. Milan Baros’ performances almost took them to another European final but an silver goal winner again destroyed the dreams of this tiny nation. An appearance at 2006 World Cup was another highlight for the country but by the turn of the decade, the Golden Generation was in its twilight years and the outflux of talent to neighbouring countries of Germany and Austria curtailed the development of many prospects.

But with ex-players getting into administration level jobs in the Czech Republic FA, things are turning around. Karel Poborsky himself is the Technical Director, looking after the development of players representing the country at youth levels and creating a good path for them to take the chance to represent Czech Republic at senior level when they are ready; by trying to emulate the same sporting schemes and atmosphere from which their Golden Generation benefitted.

A country which influenced German and Belgian Football Renaissance is itself going through the same phase and the signs are looking good till now. Exciting prospects like Alex Kral, Adam Hlozek, Adam Karabec, Alex Kral, Michal Sadilek, Ondrej Lingr, Ondrej Sasinka, Christian Frydek, Filip Soucek, Dominik Plechaty, Zdenek Hucek, Vojtech Patrak, Matej Polidar have stepped up and made a mark for their hometown teams and for country at Youth Levels too, again attracting the attention of scouts from other parts of Europe.

And Monday’s match against Scotland was an example of this Czech Football Renaissance. A brace by Patrick Schick which included a lobbed goal from 50 yards out is just the start of this generation’s rise to the top. The journey is long but the Czechs are ready for it, no matter what hurdles lie in front of them.