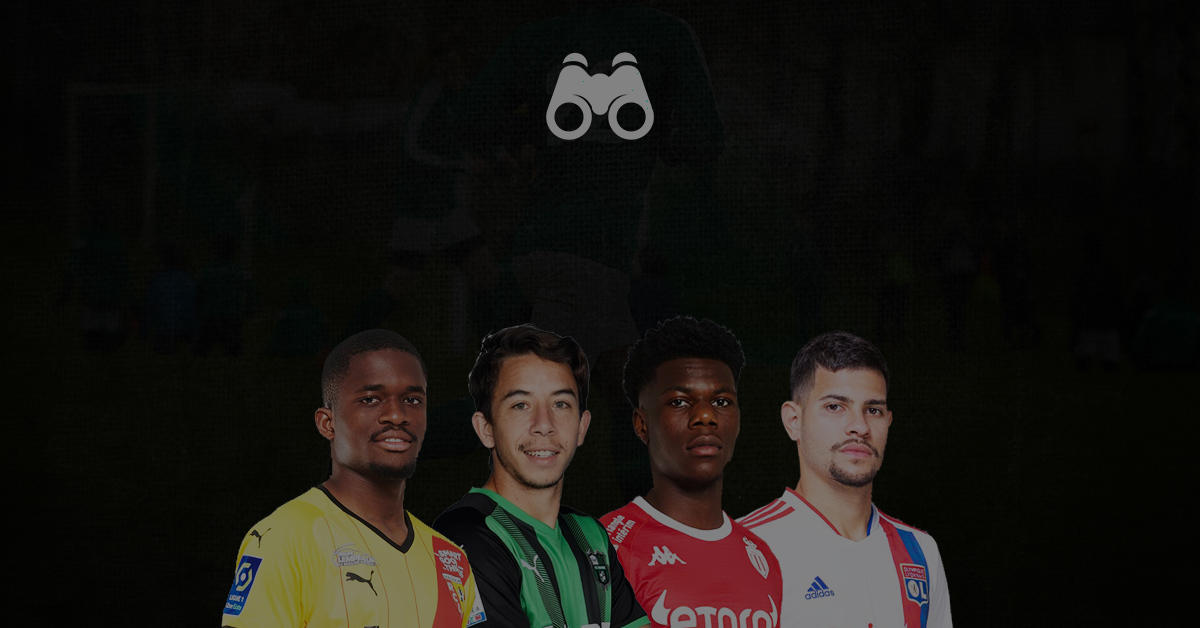 Search for a CM: Winter Shortlist

We started this series in summer 2021 using data to create a shortlist of players in the top 5 leagues who can be Manchester United’s much-needed midfield starter. This was the article and shortlist we stumbled upon. Since then, United have not bought a CM, 2 of the shortlisted names have moved to other clubs and some new candidates have emerged this season, which is why we are going to take a fresh approach to uncover the perfect midfielder United need. By the end of this article, we will arrive at a new shortlist that the Red Devils should seriously be looking at as winter transfer targets to help Rangnick achieve his interim goals.

A few notes before we start:

1. Only players from the top 5 leagues have been considered. We have covered reports of some non-top-5 players (Like Koopmeiners) before and will continue to do the same but for this analysis and shortlisting we are sticking to the top 5 leagues to keep the dataset limited

2. The filters are taken based on what I feel is needed most in United’s midfield – a profile we have lacked in recent times and one that would go well with our existing setup. More will be explained below, but a different shortlist could emerge for a totally different profile. This is simply my idea of what United need most

3. All stats are from Fbref.com (via Statsbomb)

Before we get into the process, we first need to decide the midfield role we are aiming for. Our summer shortlist article explained why a deep-lying playmaker is what is needed and that logic hasn’t changed even after Ole’s sacking. Whether Rangnick or the new manager plays a pivot or mid 3, the fact is that we don’t have anyone in midfield that can help build up, playmake and defend transitions. Matic comes closest but age has caught up to him. Think of our new player as a Matic replacement.

Additionally, all our existing profiles – Fred, McTominay, Pogba, Van de Beek and even Garner and Mejbri in future – enjoy going forward and affecting the final 3rd while none have deep playmaking or positional traits. Fred has mostly been shoehorned in a deeper role for 2.5 years but he has shown on multiple occasions that he excels more in a box-to-box role. To summarize, the new CM needs to be someone who is an elite passer, great progressor and good at the fine art of positioning. Someone with high defensive actions (pressing, tackling etc.) and a willingness to roam from his position to make final 3rd runs or press ahead is NOT what we want since we already have players for it.

Below is a percentile chart of Matic of the last 365 days. That’s more or less the profile we are going for. A younger and more mobile Matic who is capable of playing in a pivot as well as mid 3 would be ideal.

Let’s dive into the process.

STEP 1: I downloaded all passing, defending and carrying stats per 90 for all top 5 league players from Fbref. Using Transfermarkt’s position data we first filter out all players except central midfielders and defensive midfielders (credit to @jaseviz, @NinadB_06, @exceedingxpuns for the position dataset).

Next we filter out all players who have not even played 7 90s this season. Most teams have played 15 to 18 league games so far, so expecting our man to at least rack up 40% of his team’s gametime seems fair. Anything lesser indicates he might not be ready for a step up to United or is too injury-prone.

Next, I converted all the stats into percentiles. Within our data set of top 5 league midfielders with greater than 7 90s, every stat has now been ranked from 1 percentile to 99 percentile. For eg. The lowest progressive passes per 90 within this data set is represented by 1 percentile while the highest will be 99 percentile. 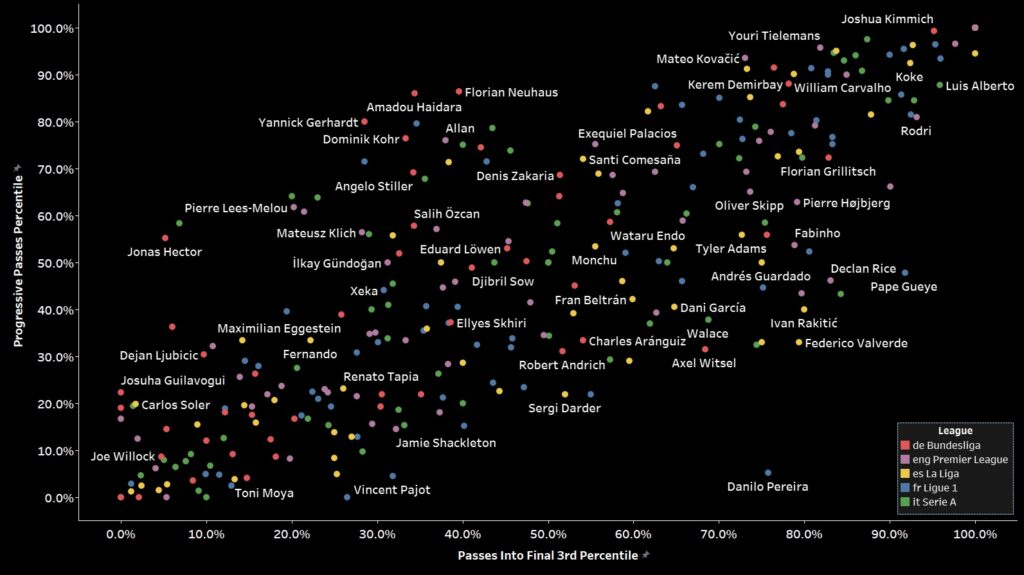 We can see that about 250 midfielders in the top 5 leagues are spread out over the graph. Let’s start with our filters.

Based on our discussion on the role so far, if I had to pick 3 stats that are most important for the new CM, they would be Pass completion %, Progressive passes and Passes into final 3rd. We need our CM to be an elite passer, safe yet progressive and someone the whole game goes through, especially in the build up and progression phases. Given the high importance, I am going to use filters to keep only those midfielders who boast >70 percentile on all 3 passing metrics. The results are as follows: 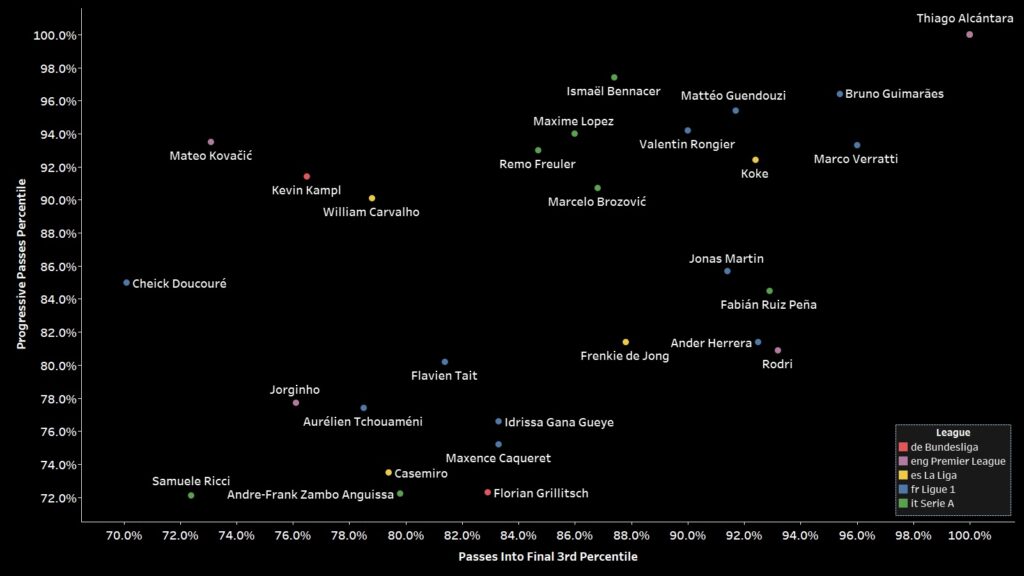 This actually cleared up a huge population immediately. Not many players can pull off a 70+ percentile on the 3 passing metrics and it shows. We can see Thiago Alcantara sitting at the top for the 2 progressive passing metrics after the filtering, which gives a good indicator of the kind of playmaker we wanted thanks to this filter. So far, so good. Let’s continue with a few more filters to get our ideal CM.

STEP 3: Our next most important set of traits are carrying. Though not as important as passing, we do need someone who is progressive in his carrying as well. Nemanja Matic is United’s highest progressive carrier in the last 2 seasons. This doesn’t imply that he’s a great dribbler or even an aggressive carrier. It just implies that he has the ability to carry the ball from deeper areas when the opportunity arises. Someone too static or glued to the defensive 3rd might not be ideal. Considering United will be playing teams that sit back and concede possession more often, our CM should be adept at getting the ball out of defence.

We use a >60 percentile filter for Progressive dribble distance per 90 and Progressive carries per 90 on the current graph. Here’s the result: 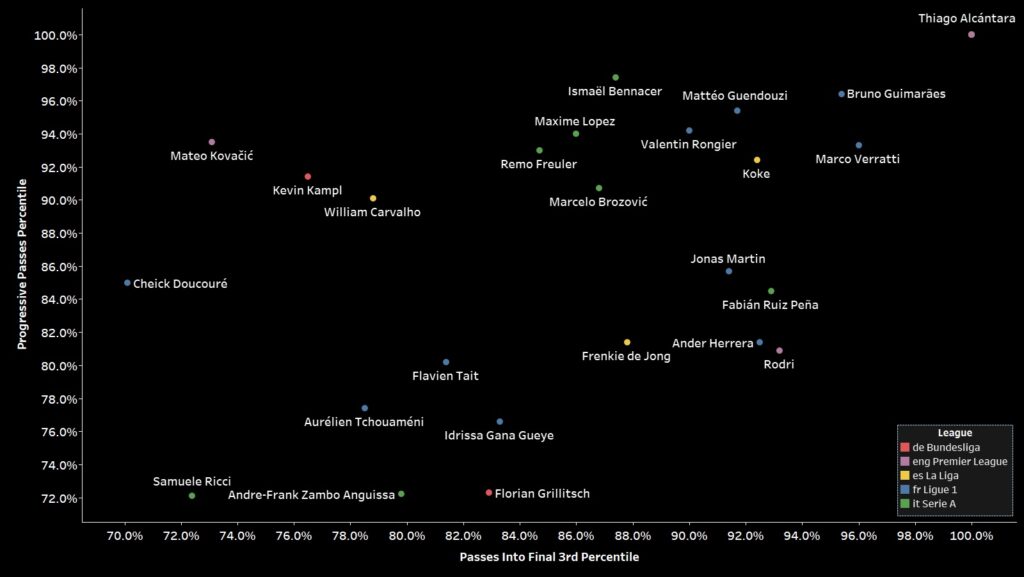 Not much of a culling this time. Most of the top playmakers in Europe are progressive via passing and carrying at the same time. A few players like Casemiro got cut which probably indicates we are on the right track. We don’t need a static mid 3 DM player who isn’t progressive in his carrying.

STEP 4: Moving on, we come to our next set of filters – defending. To reiterate, we don’t need any aggressive defending traits from our CM. Pressing and tackling at the cost of positional discipline is a NO, especially considering the fact that the new CM might be paired with Fred/Scott who are already good at that. Positioning is a tough trait to create data filters for, but I am going to suggest 2 stats that come close to describing it – Pressure success % and Interceptions.

While we don’t need a high pressing player, we do need a high success presser, someone who wins the ball most of the time he tries – a careful and measured player who holds position but comes out successful when he decides to press. Interceptions are also a mark of good positioning. We’d rather have our man drop into deeper areas, calculate where the pass is being played and intercept it rather than push up and press the passer playing it. Finding a deeper operator who intercepts the ball before it reaches the opponent attackers in central areas is the aim here. This is key to defend transitions which we struggle with thanks to our players often initiating a tackle or press in transitions (Our detailed article on this issue – here).

This is probably a low criticality criteria compared to passing and carrying. So we are going to set a nominal filter of >40 percentile on Pressure Success % and Interceptions per 90. Let’s see the result: 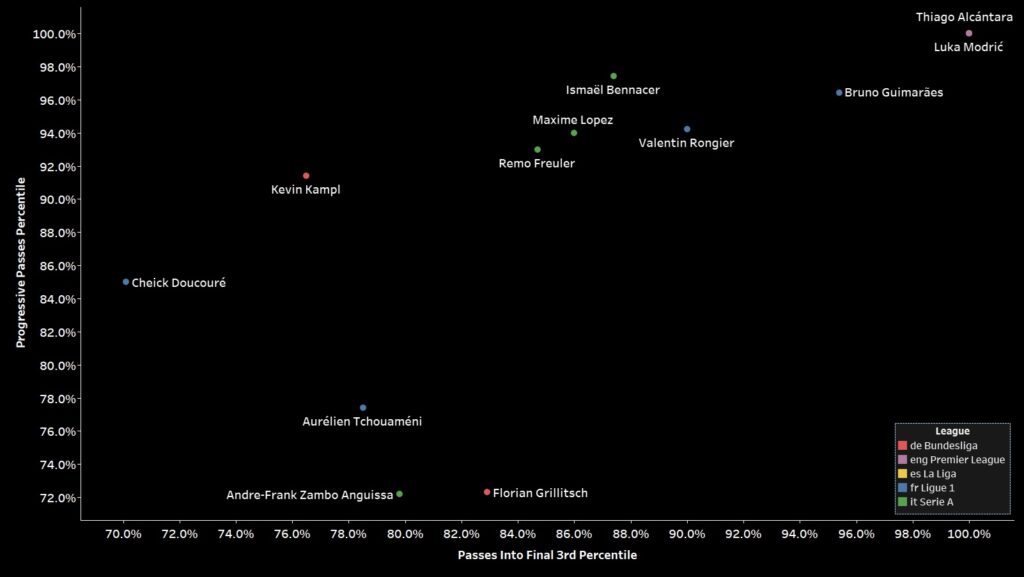 Even with such low value filters, the graph has cleaned up a lot, which goes to show how tough these traits are to manage along with high levels of progression and playmaking. The likes of Fabian Ruiz and Frenkie De Jong got cut from the data which probably highlights that we are on the right path. Those are elite playmakers, but probably a holding role behind someone like Fred or Pogba might not be ideal for them.

STEP 5: We’re in the endgame now. Traits-wise our data set seems really sorted now. Our final filter is an obvious one – age. We want young/peak players who can sign for United and remain as a key starter for a while.

So my final act will be to filter out players above the age of 27. Here goes: 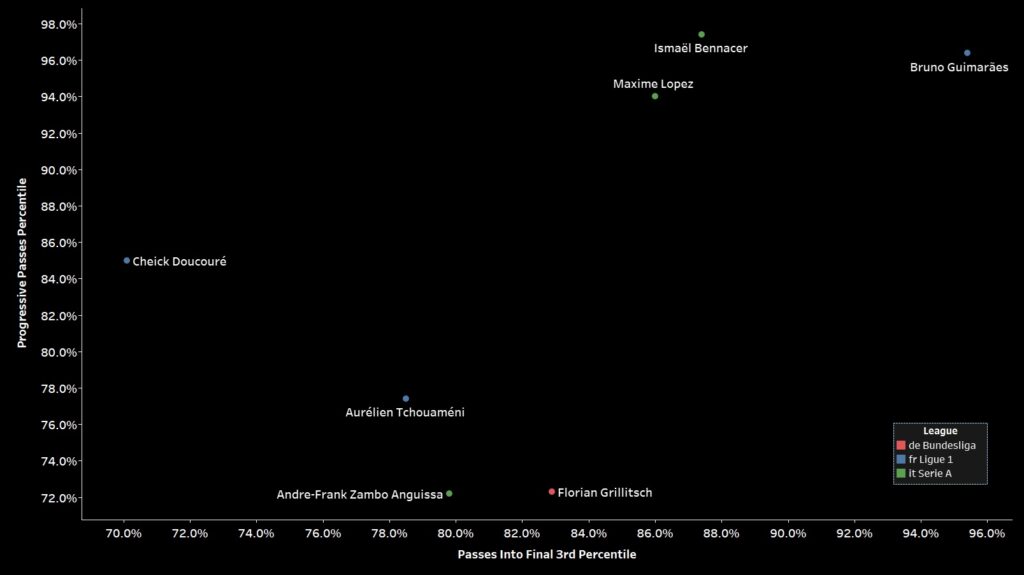 And we are left with 7 players! The likes of Thiago Alcantara, Luka Modric and Kevin Kampl who are too old and established to buy as a logical key starter for United have been eliminated. We are left with 7 U27 players who are either at their peak or approaching their peak and are realistically buyable.

The top 3 names here represent highly suitable players for the role and are all aged 24, making them prime candidates to become immediate key starters in United’s midfield. It wouldn’t be wrong to say that buying one of them and pairing with our existing midfielders would improve the team immensely. Guimarães, Lopez and Bennacer are probably must-buys for United at this point.

Grillitsch might be slightly older but represents a very good option given his suitability. He is having contract issues and could be available for cheap/free soon. Tchouameni and Doucoure’s lower suitability compared to the the top 3 is simply a consequence of their younger age and slightly defensive-bent profile (which we gave lesser weightage for). If they are bought and developed for a top team possession game, they could be excellent as well. Zambo Anguissa is probably the lowest priority target given his age and suitability, but could be a good cut-price option or 2nd buy from the list in case we need 2 midfielders given our midfield situation.

So that’s that, folks! Given United’s midfield gap and the realistic options in the market, these 7 could prove to be the best bets to plug that gaping hole in the starting XI. United should be buying 1-2 of these players within the next 2-3 windows.

As an extension of this series, we will be doing individual scout reports of these players over the next few months (Like we had done for Locatelli in the summer here). Do let us know which player’s scout report you would like to read first.

Follow us
← What to expect from Ralf Rangnick? Search for a CM: Bruno Guimaraes →