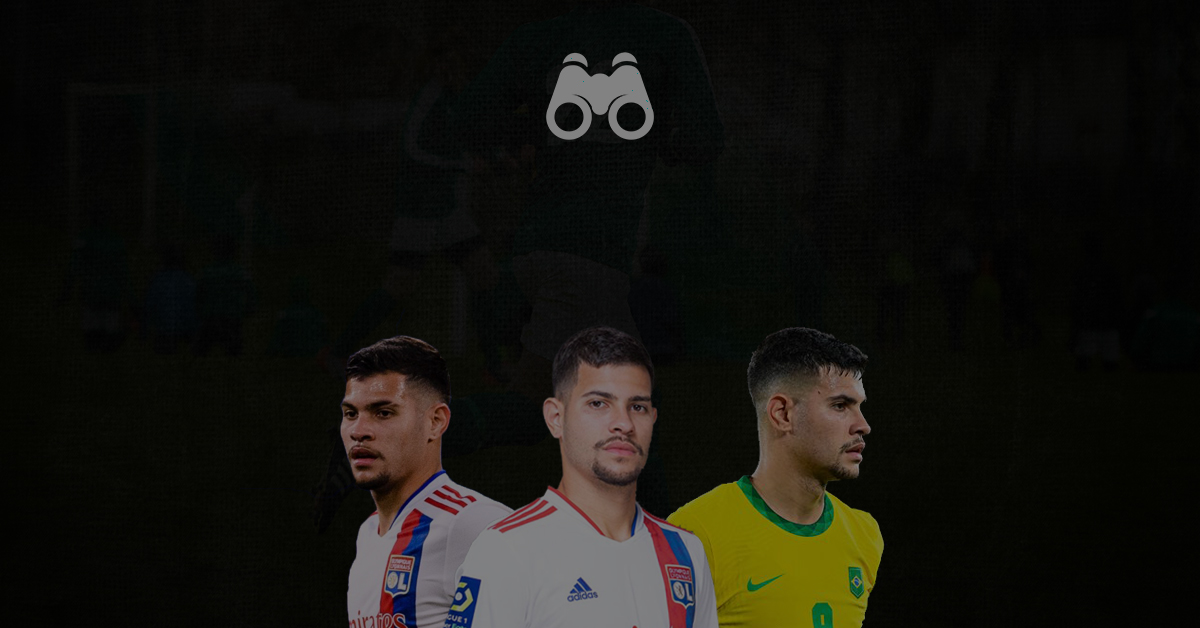 Search for a CM: Bruno Guimaraes

Bruno was born in Rio de janeiro in Brazil in 1997 and spent his formative years there playing football from a young age. His first big break came when he started for Brazilian league 2 club Audas at the age of 17. He was promoted to their main team the following year in 2017. By the end of that season he had impressed enough for Brazilian Serie A club Athletico Paranaense to pick him up on loan in May 2017. He impressed the club so much that they bought him mid-season and signed a deal with him till 2021. He became an undisputed starter under coach Tiago Nunes and renewed his contract again at the age of 20. His displays in Brazil’s top league caught the eye of Lyon who secured his services in 2020 for €20 million (and a 20% sell-on clause) on a 4.5-year deal. He has been plying his trade for the club ever since becoming a key starter in 20/21 when they finished 4th in the league. His 21/22 has also got off to a good start and at the age of 24 is now being rumored to be tracked by the top clubs of Europe.

The main reason why Guimaraes topped our shortlist in the first place was thanks to our extra weightage on passing progression stats. The idea was to look for a top playmaker in that bracket and that’s exactly what Guimaraes is. As per the calculations on our data set, (which negates players with low 90s) he boasts a whopping 95 percentile each on Passes into final 3rd & Progressive passes. Only 5 midfielders in Europe (Kroos, Thiago, Modric, Parejo, Gastien) better him on both metrics and none are younger than him. If the next best passer in Europe is the aim, you probably won’t get anyone better than Bruno G. Not only that, his progressive dribbling stats (Distance & number) are bested by only 2 players in Europe in Verratti & Modric showcasing his strength in carrying progression as well. He is probably the best young midfield progressor in the world.

He’s no slack defensively either and has actually been described as a very combative midfield general. This is backed up by his 83 percentile on tackles won and 84 percentile on successful pressures which are also supported by a decent 53 percentile on pressure success % (as per Fbref). So far, so good. While his strengths seem to be jaw-dropping, Bruno isn’t without weaknesses. Glaringly he is just 10 percentile on Dribbled past. In our data set, this number further dropped to 5 percentile after cutting out low 90s players that Fbref doesn’t. Connecting this to the eye test, Bruno has the tendency to rush into tackles and 50-50s which often leads to him being beaten by his man especially on transitions. This is an issue that coincides with United’s problem on defensive transitions (Explained here). We already have players like Fred who lunge into tackles and get beaten on transitions so ideally the new midfielder shouldn’t. This is probably one box Bruno does not tick but the silver lining is, that at his age, this can be coached out of him. DLPs like him usually mature and become more stand-up tacklers and positionally aware, especially when they move to big teams. Rodri is a good example as he also had this tendency and would often be beaten in transitions in his first year at Man City. But he’s currently overcome that issue and has been one of City’s best players and the ideal Fernandinho replacement. One can trust Bruno to do the same if United move for him soon.

Overall, Bruno fits our progression needs to the letter and would solve a lot of build up, progression and creativity needs while being tenacious in his pressing and tackling. Only his weakness of lunging in and getting dribbled past will need to be worked on and prevents him from getting a full score on technical fitment.

Now that we know what he’s good at, let’s see how his traits translate on the pitch in terms of role and tactics. Lyon have mostly lined up in a 4-2-3-1 this season with Caqueret & Guimaraes making up the pivot with Auoar ahead of them. In some cases they also shift to a 4-3-3 with the same 3. In both scenarios, Guimaraes plays as the deepest player in the mid 3. The 4-2-3-1 is far more prevalent and suits Guimaraes better as well since he enjoys the dynamism and work rate of a pivot midfielder rather than the static nature of a central DM. He has lined up as LCM often this year due to Caqueret’s preference for RCM, but Bruno is also capable of playing RCM. Guimaraes is the one responsible for the build up, progression from deep & often carries or passes from deep to kickstart the team’s moves. This is exactly what United want in their pivot as well.

One aspect of play that is a clear Guimaraes strength is his through ball ability. That special pass threaded through like a needle is always in his locker and he regularly spots attacker runs and plays them in from deep. Here are a few examples:

In the above 2 examples, Bruno threads inch-perfect passes between the defence line to put his striker 1-on-1 on goal. But even from large distances he has that ability as seen below:

Or if its from the outside of his boot as well:

Bruno’s second biggest strength is his carrying. In a combination of great ball control, Dribbling ability and upper body strength, Guimaraes constantly goes on bursting runs into the heart of midfield without losing the ball until he can create a gap to find a good pass. Here are a few examples.

In the above example Bruno picks the ball from a deep right-sided midfield area and immediately turns to take on his man, beating 2 men successively with a strong drive and taking another out with a quick pass thus progressing through 3 opponents in a flash.

Again Guimaraes picks up from a RCM area and drives, beating 2 men before sliding across a pass to his winger effectively taking out 4-5 opponent players and creating the space for his winger to get a shot from.

With this unique combination of vision, passing ability, dribbling & strength, it almost becomes impossible to stop Bruno from progressing. If you give him space, he picks out runners and strikers easily and if you press him, he can dribble past you to create space, making him the ultimate press-resistant tool for progression.

Tactically speaking, Bruno’s best role might not be a RCM DLP yet. A pairing beside a left-sided attacking LCM like Fred/Pogba might not be most ideal in his current form. One could even argue letting him roam as the attacking CM in a pivot alongside a sitting DM could work well. Here’s where coaching and what he’s trained into in the next 2-3 years becomes really key. Many DLPs like Carrick/Matic developed positioning and understanding of a deeper progressive role later in their careers and Bruno G has that ability for sure. We’re cutting 3 marks because of this reason. Mostly Bruno can develop into what United need, so overall, it’s still a terrific fit. It’s just not a readymade one that’s all.

Fabrizio Romano recently tweeted that Lyon want at least €45m for Guimaraes which is a pretty reasonable ask for such a talented player who has more than 2 years left on his contract still.

Arsenal have been the club linked most to the Brazilian but as of January 6th, Guimaraes had this to say: “Arsenal approached my agent, but there was no offer. My aim, and I made it clear to Juninho, is to win a title with Lyon. My aim is to win a title here, but I have never hidden my desire to play in the Premier League.”

This probably rules out a winter move unless a very compelling offer comes in. It also opens up the playing field for other clubs, especially in the PL. Given the high competition for his signature and low United link, we might have to cut some marks, but overall his openness to the Premier League and the rumored transfer fee make this a very attractive and realistic proposition for United.

This brings our final scores to:

So there you have it. Guimaraes looked like he was the best option among our shortlist, but further inspection has uncovered that he might not be the 10/10 target that we had hoped for, thanks to his defensive transition weakness, doubts over a deep holding role and transfer competition. Overall, he still offers a huge upgrade on what United have, is probably the best young progressor in Europe and could fix United’s progression issues immediately all at a very modest transfer fee, which still make him a top transfer target.

Whom would you like to see covered next from our shortlist?