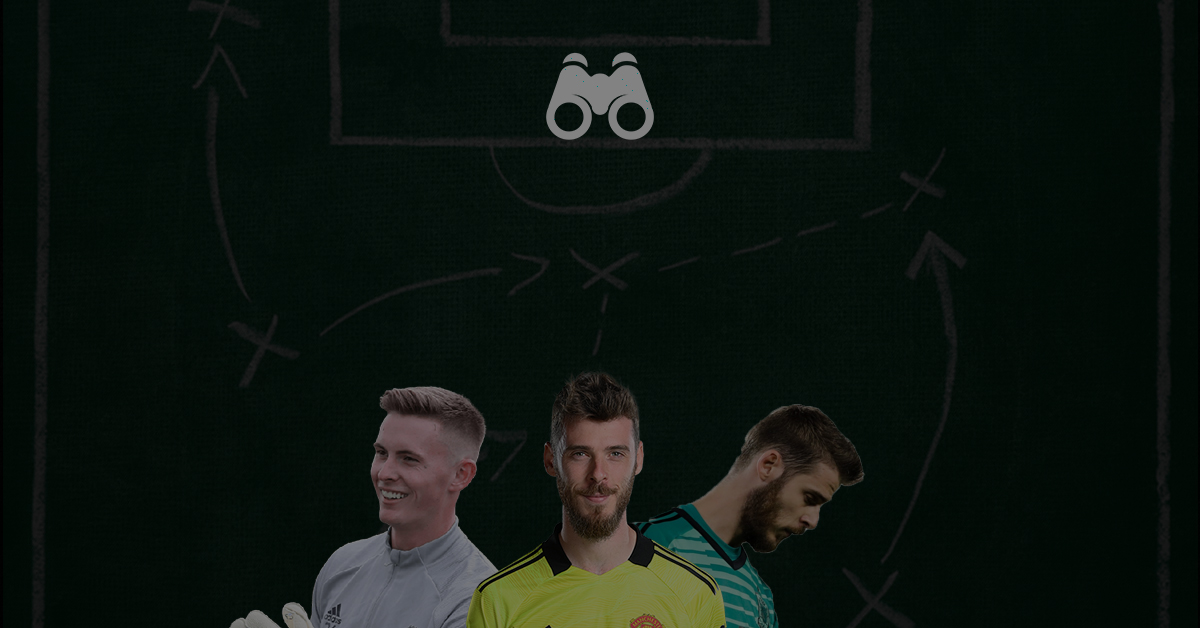 So far this season, Manchester United have changed 3 managers, struggled to gather any type of momentum and produced a string of subpar performances. After what has undoubtedly been an underwhelming first half of the season for Manchester United, only a select few players can make a case for being consistent throughout an abysmal run of form. David de Gea is one of them. The Spaniard has been consistent throughout this run of poor form, pulling out saves directly from the top drawer and winning matches on his own for the Red Devils. The type of form all Manchester United fans have always associated de Gea with from 3 years ago.

In this piece, we will talk about how David de Gea’s abilities may not exactly complement Manchester United’s plans.

We will be analyzing 4 aspects of David de Gea in this piece, namely his shot-stopping, sweeping, distribution and overall command over the area. We would also be comparing his stats with Dean Henderson to give more of an objective view.

David de Gea has made 71 saves so far this season, with a 72% save percentage. The Spaniard has a PsxG-GA of +6 stat, meaning he has conceded 6 goals less than what has been expected of him. To put this into context, De Gea had a PsxG-GA of +9 in the whole of 2017-18 season, one of his best seasons in a United shirt. All the statistics and the ‘eye test’ suggest that the Spaniard is back to his best in terms of shot-stopping.

If we compare this to other goalkeepers in this league, we can clearly see that de Gea has been one of the best shot-stoppers in the league. 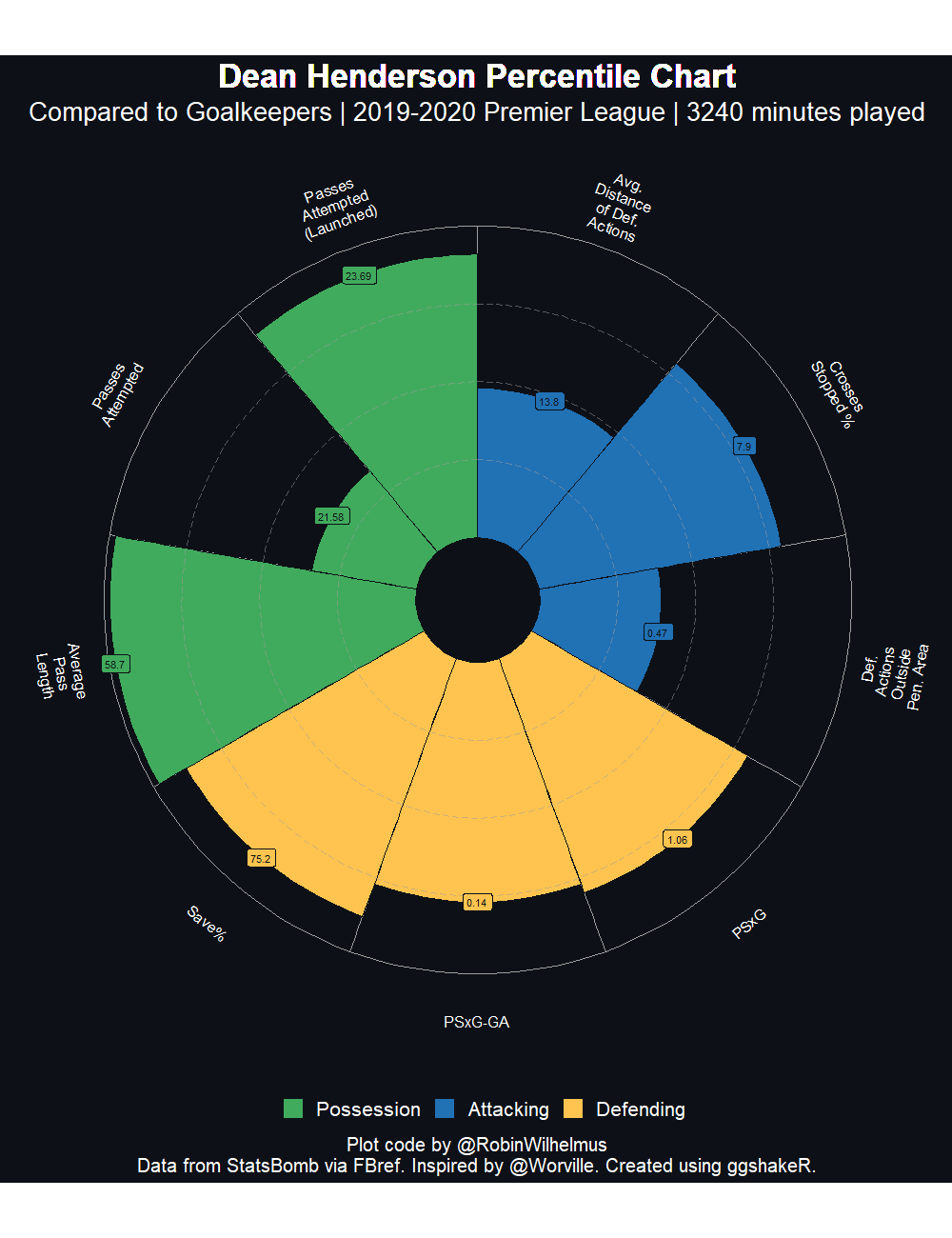 Dean Henderson hasn’t played much this season but if we see his stats from the two seasons he played the most i.e 2019-20 for Sheffield United and 2020-21 for Manchester United, we can see that he is not a slouch when it comes to shot-stopping.

But is shot-stopping the only thing that matters for a Goalkeeper?

Even though shot-stopping still remains one of the most important aspects of being a goalkeeper, the answer to the aforementioned question is no. In modern football, where the majority of the teams depend on building their attacks from the back and also depend on starting their defending from the front in terms of pressing the ball and winning it back, other aspects such as composure, passing and most importantly, sweeping are just as important as shot-stopping.

In modern day football, distribution is a key aspect of a Keeper’s game. A few years ago, a keeper having good distribution may have been a luxury, but now, and going forward, it is a necessity. More and more teams are modeling their game around building attacks from the back and being patient and methodical to beat the opposition’s press. The fundamental thing while building up from the back is attracting the opposition press and beating it thus creating enough space for the midfielders to function.

If we look at how Ederson plays for Manchester City then we can understand how crucial it is for a keeper to have good distribution and composure on the ball to build-up play. Ederson is arguably one of the best goalkeepers in terms of sweeping and passing but what makes him so good is his ability to pick out the right passes, beat the opposition press and help his team progress the ball further up the pitch. David de Gea’s distribution is a major weakness in his overall ability.

In this instance, Matic makes a long pass back to De Gea. Telles makes himself available for the ball as seen below but de Gea takes a touch in the opposite direction and ends up kicking it long.

Result: United lose possession as Greenwood is beaten in the air by Digne

Another instance when Telles was in lots of space and calling for the ball but the Spaniard again decides to kick it long, resulting in Manchester United losing possession

Now here is arguably his worst moment from the match. He receives the ball at 53:50, keeps the ball for another 10 secs as no Aston Villa player was pressing him. Varane and Lindelof are available for a pass where he can pass it to them, re-adjust as to attract the press from Aston Villa players and then look for Matic through the middle for either of the fullbacks enabling him to beat Aston Villa’s first line of defence.

Instead, de Gea holds the ball for too long and then eventually kicks it straight to the Villa player resulting in United losing possession of the ball.

There was one moment in the match where de Gea did well. Here, Varane passes the ball back to De Gea. Lindelof gets wide to provide a passing option but instead de Gea picks a clever pass through the middle of the pitch to Fred, thus beating the Villa press.

Fred passes it sideways, Telles picks up the ball and United progress the ball after beating Villa’s first line of defence.

It may not seem like a big thing but these small things are important in what Rangnick has been banging on about since he came in: More control.

Recycling the ball, keeping possession and beating the press in a patient, methodical way is very important to gain control of the matches. This is the reason why Pep Guardiola switched 3 goalkeepers in 3 years when he first came into Manchester City. In modern football, goalkeepers are just as important as the defenders in building play from the back and keeping up the momentum by recycling possession and thus helping the team to have more control of the games. Having more control over matches means that there are fewer opportunities for the opposition to have shots at the goal resulting in the team being less dependent on their goalkeeper to make saves. Making a large number of saves is not a good sign for the goalkeeper or his team.

Of course, Manchester City is way more well-drilled in this regard than Manchester United are. There are also many instances when de Gea wants to pass to someone and the outfield players don’t offer him a viable option. But, it has to be considered that distribution is not De Gea’s best suit and that Dean Henderson’s distribution qualities are better.

Over the past few years, the ‘sweeper-keeper’ role has gained a lot more prominence. Teams have started playing a higher line of defence considering that their goalkeeper can leave his line, get out of the penalty box if required and sweep up any long balls coming their way. It has become a crucial aspect for teams to maintain their shape and momentum.

Sweeping has always been a major weakness in David de Gea’s style of play. If we look at the stats below from his last two seasons, it is evident that he doesn’t offer much in terms of sweeping the ball.

If we compare his sweeping with all the other goalkeepers in the Premier League, it makes for a pretty grim reading.

De Gea ranks among the lowest sweepers in the whole league. Alisson and Ederson, unsurprisingly, among the best. And even at a team like Burnley, Nick Pope is excelling as a sweeper-keeper proving that sweeping is an important aspect of goalkeeping despite the system.

If we are to jot it down, de Gea would be labeled as an ‘on-the-line’ keeper who doesn’t offer much movement outside the 6-yard box. That is fine if the team depends on low blocks and a deeper defensive line. But, if a team is married to playing a high defensive line, then the goalkeeper must have good capabilities in sweeping long balls behind the defence. De Gea falters a lot in that aspect and it is evident that Dean Henderson is a much better ‘sweeper-keeper’ than David de Gea.

Command of the Box

Now, this is one aspect of goalkeeping that is not synonymous with being a modern-day goalkeeper. Having command over the 6-yard box was just as important 12 years ago as it is today. But what does it actually mean?

Having command over the box means how much of the area around the goal can the goalkeeper cover. It might mean being as loud as you can while commanding the defenders to take up areas that might be out of scope for the goalkeeper. It might mean adjusting your starting position depending on the type of cross that comes in order to give yourself the best chance of claiming it or punching it.

Having command over the box is most helpful while defending set plays and/or playing against a team that depends a lot on their crossing or long balls into the box to create their chances. Claiming crosses helps a goalkeeper in having to make fewer saves as it is an outlet that completely kills the opposition attack.

David de Gea claims 4.2% of the total crosses attempted by the opposition which ranks him the lowest percentile of goalkeepers in the whole league for the 2021-22 season.

As we can see, David De Gea’s ability to collect crosses is quite poor compared to his counterparts in the Premier League.

We will once again compare Dean Henderson’s stats with David de Gea in this regard.

If we look at the blue sections in the above graphs, we can see that Dean Henderson is much more proactive when in goal. He sweeps more, claims more crosses and has a better overall presence in the box as a goalkeeper.

Ideally, a goalkeeper should not be required to make a lot of saves. Obviously, this depends more on the defence in front of him but in today’s day and age, the overall style of play of a goalkeeper has as much of an impact too. While Dean Henderson may not be as good of a shot-stopper as De Gea, his shot-stopping is still very good and the Englishman seems to be better at the other aspects than his Spanish counterpart.

Coming back to his shot-stopping, this below viz, courtesy of Rahul ( @exceedingxpuns on Twitter), makes for an interesting reading.

The first thing that Manchester United need to figure out is what style of play they want to implement in the team. If the club wants someone who can defend leads, is a bit more pragmatic in his approach and likes to play a deeper defensive line as their next manager, then David de Gea should retain his no.1 spot. Otherwise, if they want to go with a manager who likes to keep a high line, likes to press higher and control the game in the sense of having more of the ball, something which you can say is expected of a ‘top team’, then evidence suggests that Dean Henderson would be a better option going forward.

Currently, Manchester United’s style of play does not suit David de Gea’s style of play. There are indeed a lot of other issues Manchester United have such as lacking a deeper-lying progressive midfielder and various structural issues which leaves the team vulnerable to counter-attacks. The Spaniard’s presence as a shot-stopper is proving to be somewhat of a positive currently. But, if Manchester United want to have more of a presence as a team that likes to play on the front foot, then Dean Henderson’s as the no.1 goalkeeper would be a bigger net positive for the Red Devils compared to his Spanish counterpart.