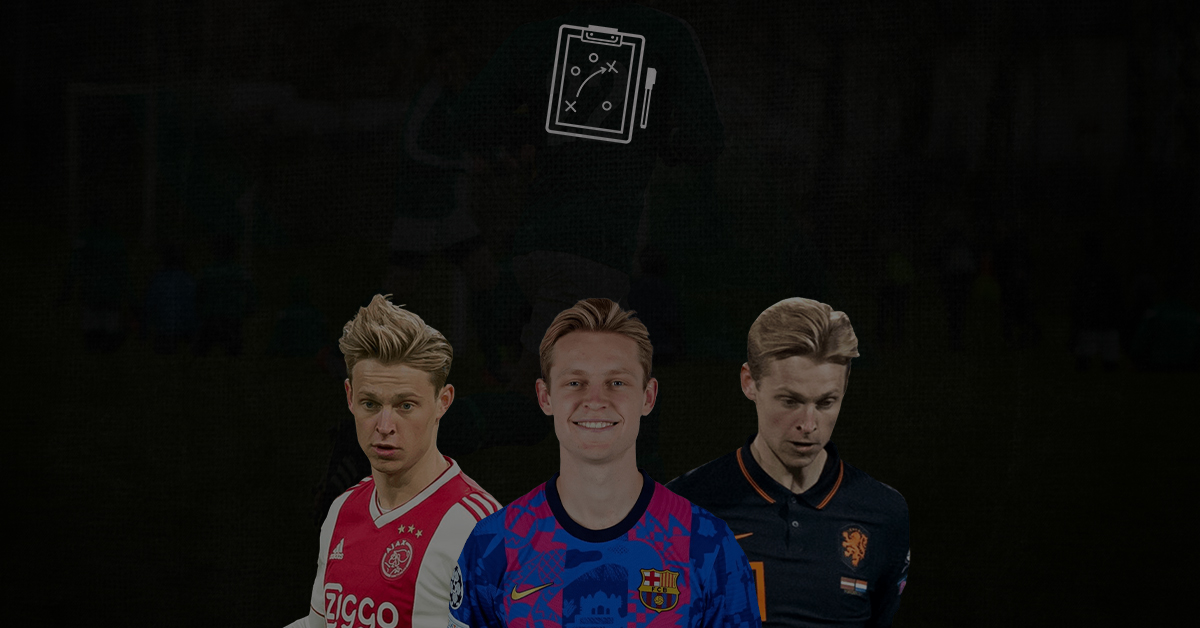 A new manager, a new CEO, a newly appointed DOF and technical directors and loads of changes in the backroom staff plus board level at Manchester United – the message is that a new era will commence from the start of the 22/23 season. And as always, the transfer rumors for the next season have already started with United rumored to be looking at signing the whole Ajax squad including Jari Litmanen.

Jokes aside, Erik ten Hag has identified the midfield as the primary area of reinforcement and it doesn’t require rocket science to figure out why. With the departures of Nemanja Matic and Paul Pogba, Manchester United only have Scott McTominay, James Garner and Fred capable of playing the deeper midfield role. Bruno Fernandes and Donny van de Beek are also there, but they are more suited to playing the no.10 role.

No matter what formation Erik ten Hag wants to play, he is going to, ideally, need 2 midfielders.  According to reports, Manchester United have, so far, identified Frenkie de Jong, Ibrahim Sangare, Kalvin Phillips, Christian Eriksen, Ruben Neves, N’golo Kante and Vitinha as potential midfield recruitments. Vitinha and Phillips have already secured moves elsewhere, but we can get an idea of the profile ten Hag is targeting. I will elaborate on this later, but all of them, to an extent, would fit with what Erik ten Hag seems to be planning currently.

Frenkie de Jong was a part of the Willem II academy growing up. He was transferred to Ajax for €1 million when he was 18 years old and was loaned back to Willem II for the first half of the 2015/16 season. Upon his return to Ajax in January 2016, De Jong was in and out of the first team for the 15/16 and 16/17 seasons and made a majority of his appearances for the B team, aka Jong Ajax. He made a few substitute appearances here and there, with one being in the Europa League final against Manchester United.

In the 2017/18 season, de Jong primarily played as a center-back in a back 4 alongside Matthijs de Ligt, after the club lost Davinson Sanchez to Spurs in the subsequent summer. He also played in a 3 man midfield from time to time, proving his versatility.

The 2018/19 season was the big breakthrough for the Dutch midfielder. Ajax had a brilliant season under current Manchester United manager, Erik ten Hag, with the Amsterdam-based club winning the domestic double and reaching the UEFA Champions League semi final for the first time in 22 years. Aged 21, De Jong was one of the most crucial players in that season and also started to receive praise from all around Europe, with Rafael van Der Vaart claiming that de Jong was one of the best midfielders in Europe with the ball at his feet.

Due to his stellar performances for Ajax in the middle of the park, de Jong attracted interest from the top European clubs with Paris Saint Germain, Manchester City and Manchester United all eyeing the young midfield sensation’s signature. Ultimately, de Jong chose FC Barcelona as his next club and on 23rd January 2019, it was announced that de Jong would be joining Barcelona, effective from the 1st of July 2019.

De Jong has endured a tough time at FC Barcelona so far with his performances not having the impact people would have expected from him. Barcelona’s financial situation and uncertainty haven’t exactly helped him either. This summer, it has been reported that due to the club’s deteriorating financial situation, Barcelona would be open to selling de Jong and it looks like Manchester United are the one who have blinked first.

Frenkie de Jong can best be described as a deep-lying playmaker. He has previously said that he likes to be the first one to receive the ball from the defence while building up the play and also likes to join the attack and be closer to the goal in the attacking phase of play. The Dutchman is generally the primary ball carrier and the deep-lying playmaker for the team.

His stats reflect his preference for his own style of play. The 25-year-old had a 91% pass completion and an 82% long pass completion in La Liga last season. He also averaged 5.22 progressive passes p90 along with 7.24 progressive carries in the league. The stats also line up with the eye test that De Jong is an elite ball Progressor. He also averaged only 0.6 bad touches p90 which means he can be classified as a press-resistant midfielder.

Now, on face value, de Jong is exactly the type of profile United have missed. Manchester United, especially under Ole, have struggled to break down low blocks and have really lacked a midfielder who is able to progress the ball from deep. However, would just signing Frenkie de Jong solve all of United’s issues?

The answer is – probably not.While being an elite ball progressor, the Dutchman’s defensive stats aren’t the greatest. In fact, they are among the worst in  Europe’s top 5 leagues in the last 365 days. So, while he might probably be the best profile to solve United’s issues in ball progression, he is probably going to need help alongside to win the ball back.

As you can see, de Jong is world-class in passing and possession and for someone of his profile, his attacking stats aren’t that bad either. His defensive stats look very bad at first glance, but we should remember that Barcelona, on average, keep almost 60% possession in the league. If we adjust his stats for possession, his defensive abilities are not as bad as they look in this graph but they are not that good either that he is able to play as a lone DM or a number 6. His defending, even after adjusting for possession, is still a notable weakness in his profile.

Now that we know what type of profile de Jong is, we will try to figure out how he would fit in at Manchester United under Erik ten Hag.

In the 18/19 season, Ajax lined up in a 4-2-3-1 with Donny van de Beek as an attacking midfielder and Frenkie de Jong partnered by Lasse Schone in the midfield pivot. De Jong, as mentioned before, used to drop in the backline as a faux CB to receive the ball. As you can see below:

De Jong was the heartbeat of this Ajax side – all the progression in the defensive third and mid third was carried out by de Jong by either progressive passes or progressive carries. Contrary to popular belief, ten Hag is not a ‘possession-hungry’ manager. He likes to build up from the back and has some characteristics similar to Pep Guardiola, but his philosophy is more towards domination. He likes his teams to move the ball up the field much quicker than someone like Guardiola would. De Jong definitely helped in this regard with his progression..

When de Jong would drop deep, Schone would take up an advanced position to help with creating more passing options while building up the play. Once, the ball was moved past the mid-third, de Jong used to then act as the advanced mid while Schone used to drop deeper to cover for the advancing wingers and de Jong. Schone was the engine of this team while de Jong was the primary creator. As Fred once said, ‘I am the person who carries the piano for artists to play’. Schone was that for this Ajax side.

Now, this is where the second midfield profile is crucial for Manchester United. Comparing the style of plays and the profiles, it seems as if ten Hag wants to recreate his 18/19 tactic at Ajax which was immensely successful. Let’s look at the names that Manchester United have been linked with: N’golo Kante, Kalvin Phillips, Ibrahim Sangare. These are usually the primary ball-winners and engines of any midfield. Phillips is probably on his way to Manchester City but the initial target identification by Manchester United points towards Erik ten Hag wanting to recreate a similar style of play to his 2018/19 Ajax side.

Currently, it is also very difficult to predict how Manchester United will line up next season considering a big chunk of the transfer window is still remaining. But if we were to guess, considering the current squad, our best bet would be that de Jong will line up alongside Fred in a 4-2-3-1 with Bruno Fernandes as the attacking midfielder. If we draw parallels between Lasse Schone and the current crop of midfielders at Old Trafford, Fred would probably be the closest to the Danish midfielder’s style of play. So, naturally a midfield of de Jong  – Fred – Bruno would be Erik ten Hag’s first choice provided that United are able to secure the signing of de Jong.

The above viz exemplifies what we have discussed so far. Firstly, it probably describes Frenkie De Jong in a nutshell – amazing progressively but very poor in terms of ball-winning. Frenkie is clearly in the top 10 midfielders for progressive actions, but he’s also in the bottom 5 for on-ground ball winning actions. He can give you great progression, but needs a ball-winner beside him to balance the midfield. This is where we look at players above the average line for defensive actions. As theorized before, Philips seems like a perfect compliment, diagonally opposite on the viz and one of the best ball-winners in the business. Kante also looks well above the average line and boasts similar progression to Frenkie as well, a nice reference to his world-class ability with and without the ball, when he is 100% fit. Fred is a decent option, just above the average line. All other United midfielders are below the average line.

Even though a Fred – de Jong partnership has a chance of working out, the Red Devils really should look at signing another midfielder. Fred, while being a good ball-winner, lacks the positional discipline required from a no.6. The shielding ability that someone like Matic brings to the team helps the team be less susceptible to counter-attacks. If you have observed Manchester United in any capacity last season, you would know that it was one of the biggest issues the club faced on the pitch. Fred may be able to do a job alongside de Jong but he is better as an 8 than a 6, as his role under Rangnick and for the Brazil team proved. If Manchester United are looking to compete with the Liverpools and Manchester Ctiys, they should invest money in a defensive midfielder who can partner de Jong and help improve United’s defensive transitional issues – something ‘McFred’ has failed to achieve so far. The Fred – de Jong pivot, while not exactly bad, will have its limitations.

To summarize, Jong would be a real coup for Manchester United, especially for the price being quoted recently. He is the type of midfielder Manchester United have lacked in recent years. United have not had such a strong deep-lying midfielder in terms of progression – someone who can break opposition lines and help the team move the ball forward. The last 2 seasons have seen Luke Shaw emerge as the primary deep-lying progressor of the team, since Matic has not made a large number of appearances due to his declining ability. But Shaw has very limited range and scope for progression from the left flank which has made Manchester United’s attacking structure a bit predictable. Frenkie de Jong’s skill set would definitely help the Red Devils in solving this issue.

Although, he will need certain profiles around him to make this signing work. McTominay, Garner or Fred are more of box-to-box midfielders. Since Matic’s departure, Manchester United are lacking a recognised defensive midfielder. The current midfielders at the club just aren’t defensively disciplined enough to partner with de Jong in the middle of the park and cover for his weaknesses. If Manchester United are unable to sign the right profile that can partner with the Dutch midfielder, there is a huge risk that the club would fail to get the best out of de Jong.