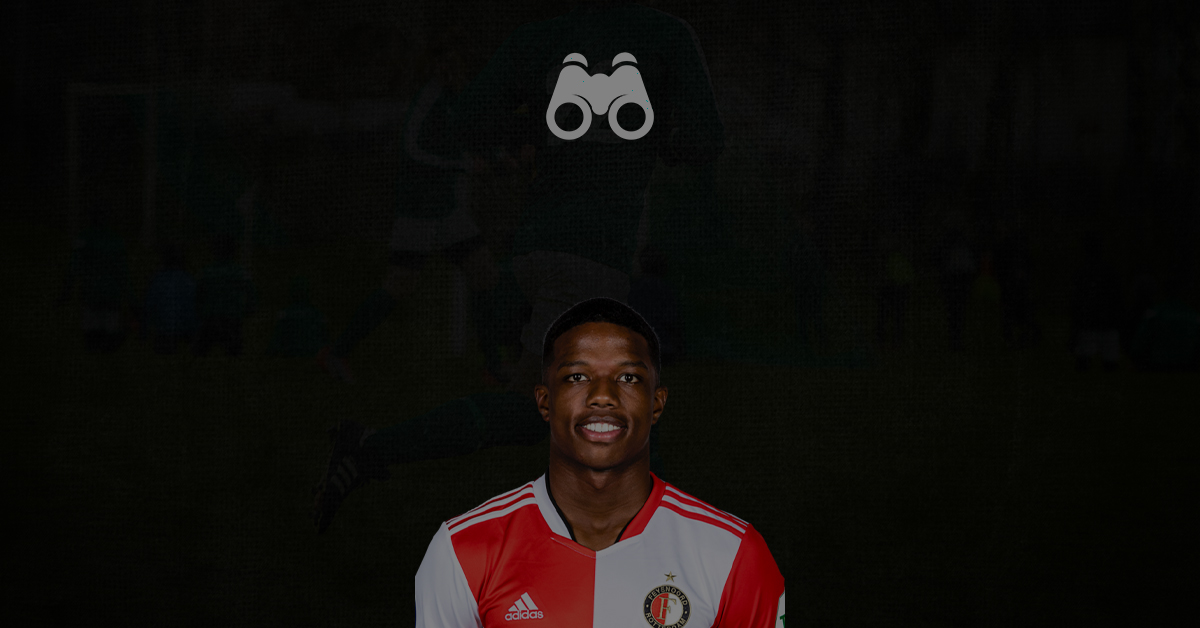 Yet another ‘mercato’ is underway and this is a period where teams either go full throttle with due diligence and planning or go full throttle with nitro boosters without any succession plan. Manchester United have been on the latter side for quite a few years but for once, there is a feeling that even a rigid institution like them is trying to be more flexible in their approach towards the transfer market. Only time will tell if they have actually learned from their past mistakes or are they just their usual self. Erik ten Hag has officially taken over the reins of the team with his first ever training session at the club taking place on 27th June. The current squad is far, far away from the ideal Ten Hag one and some massive gaping holes are needed to be fixed, especially in the areas from where his playing XI likes to build up the game.

Fullback department is one such place, Ten Hag or not, where the club needed a massive investment (and the right kind of investment). One player which the club is actively pursuing is Tyrell Malacia of Feyenoord. In this scout report, I will try to analyze the strengths, weaknesses of the player and how those will be affected if he chooses Manchester United over Lyon.

Born and brought up in Rotterdam, Tyrell joined the famed Varkenoord academy of his boyhood club Feyenoord in 2008 as a 9 year old kid with the ambitions of making it big with his hometown club. Malacia rose through the ranks of the academy over the years, eventually signing his first ever professional contract with the club in 2015. Tyrell impressed in his short stay at Jong Feyenoord, the reserves side of Feyenoord and was promoted to the senior side at the start of 2017-18 season. He made his debut in the Champions League in a famous 2-1 victory against Napoli where he played the entirety of 90 minutes. A week later, he made his Eredivisie debut in a 1-1 draw against SC Heerenveen.

He has become a regular for the team over the years while representing the Oranje at every youth level. He was also eligible to play for Curacao and Suriname due to his parents and also got a call up to the Curacao national team for 2021 CONCACAF Gold Cup, making the preliminary squad but the Oranje eventually capped him, picking him to play 2022 World Cup qualifiers against Norway, Turkey and Montenegro.

Malacia has enjoyed moderate success with his hometown club, winning the KNVB Cup in his first ever season as a senior player, also winning the Johan Cryuff Schaal (the Dutch version of Community Shield: league winners vs domestic cup winners). But his best season came under Arne Slot who took a Feyenoord side to the finals of the inaugural UEFA Europa Conference League, eventually bowing down to the AS Roma side led by Jose Mourinho. But this younger Feyenoord side went down fighting till the very end, the same mentality shown by Malacia over the years as a professional. He was selected in the team of the tournament as a result of his stellar performances.

For a fullback, being athletic and having brilliant stamina is a plus in the modern game because of the way the game has evolved for good (or worse?). You can’t be just ‘failed Centre Backs’ and protect the wide areas and let the winger ahead of you do his thing. Modern football requires the fullbacks to be involved on the entire flank, right from the start till the very end; the entirety of 105 meters. For a young player like Malacia, this stamina and athleticism was present right from the start which made his transition to the senior side very easy. This athleticism feeds into his defensive strengths as well: a brilliant recovery pace and the understanding of the situation which makes him a menace in one vs one situations. When you have the combination of not just the brute strength but the brains and the mental condition to make these skills work, you have a brilliant fullback on your hands.

Malacia has good anticipation skills but often he gets caught out of position during transitions. He will avoid the opposition’s wingers to get into their preferred areas of the pitch pro-actively but get caught lacking, which somewhat is a concentration issue and can be fixed with experience.

In terms of attacking game, he has that burst of pace and acceleration to beat his man and a good control on the ball to make dribbles down that left flank. His athletic build and good ball control makes him a brilliant ball carrier. He likes to stay wide and use the width of the pitch, sitting deep into the opposition half to receive the ball wide, allowing the winger on the same flank to keep the fullback of opposition busy and narrow and Malacia using this created space to exploit in order to gain advantage. Crossing is one of his decent facets of the attacking game, knowing when to cross, where to cross. With a competent pair of wingers and a striker who has brilliant off the ball movement, Malacia’s deliveries into the box can yield him a lot of assists.

In terms of progressive passing, Malacia was lacking but the past season has seen him improve a lot in terms of progressive passing and it is down to the coaching under Arne Slot. Earlier, Malacia at times used either under-hit a pass or over-complicate a simple pass when bombing forward but this season has seen him fix this glaring issue in his game and completely take a U-turn in the possession phase of the game. There was also a reason for this part of his game being under-developed. Malacia made his debut under Giovanni van Bronckhorst but his stay was short when he jumped onto the scene, after that he has went on from Jaap Stam to Dick Advocaat who didn’t emphasize a lot on possession phase of the game but with the introduction of Arne Slot on the sidelines, it’s not just Tyrell Malacia who has seen massive improvement in his overall game, his team-mate Lutsharel Geertruida has also improved his overall gameplay. 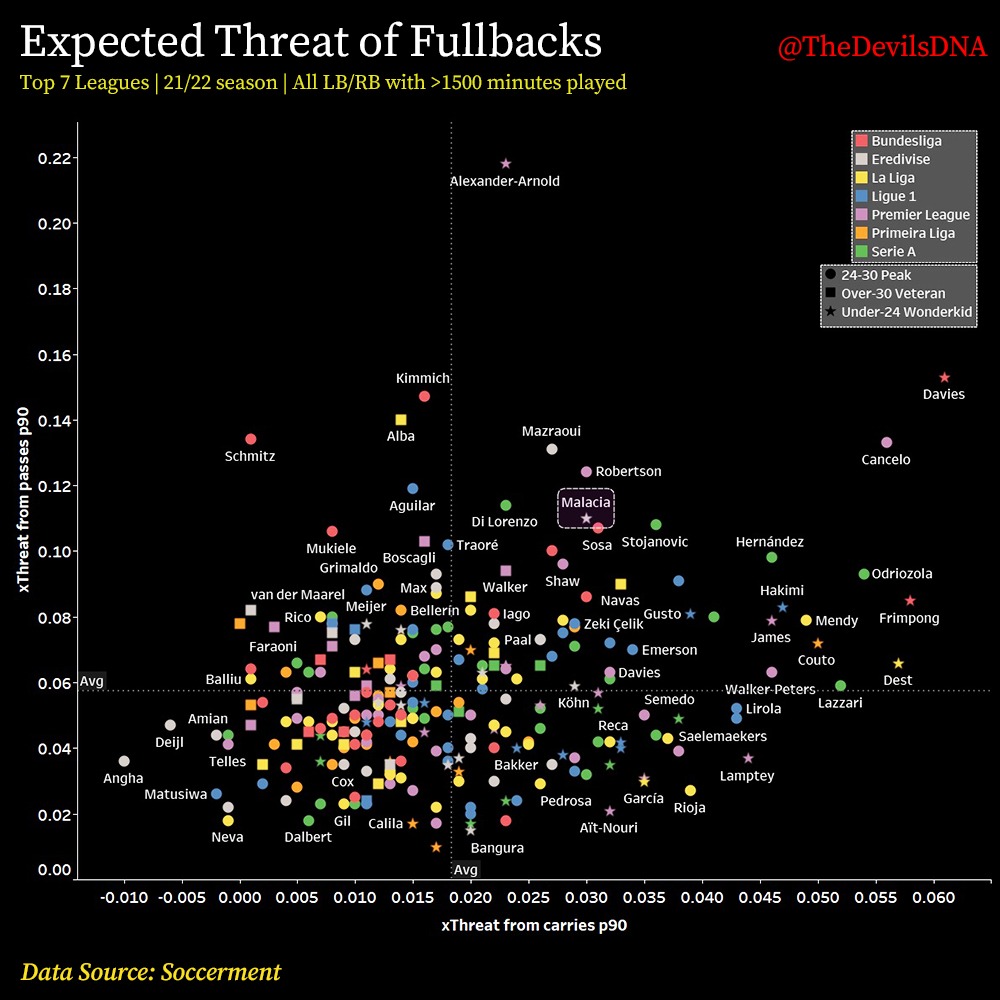 If we compare Malacia’s expected threat with fullbacks from the top 7 leagues, he doesn’t look bad at all. While league differences play a part, and in the Premier League, this could reduce, Malacia still looks good in the top-right quadrant of the above visualization, being strong at creating threat both from carries and passes. Within the Under-24 age bracket, keeping aside the 2 ground-breaking wonderkids, Alexander-Arnold and Alphonse Davies, Malacia looks the next best. All indications are that he will become a well-balanced fullback who offers good attacking threat at his peak for a top team.

Another facet of his game which he requires attention is the positions where he should receive the ball. Malacia has always been instructed to stay wide and receive the ball deep into the opposition’s final third. But for Oranje and bigger teams where he will need to see more of the ball, he will need to learn when to invert in-field while receiving the pass. Some improvement has been made in this aspect under Arne Slot last season but there is still some way to go.

A brilliant 2021-22 campaign has seen him win plaudits from a lot of his critics and has attracted the attention of teams from abroad. Lyon have already made an agreement with Feyenoord for a transfer worth 15 million euros but Manchester United have now tried to hijack the deal. Malacia is himself in a similar situation to his Oranje teammate Jurrien Timber. Both players are rated a lot by Louis van Gaal and are preferred in their respective roles as well. A move to a big club just months before the World Cup can dampen the chances if playing time isn’t managed well at new clubs. At Lyon, Malacia will be guaranteed playing time given Malacia is rated highly by their head coach and fellow country man, Peter Bosz.

A sensible decision will be needed from the player’s camp, who has the same agent as Frenkie de Jong, another player who Erik ten Hag and Manchester United are pursuing. Whatever club Tyrell Malacia may choose, this is a player who has the tools to become a well-rounded fullback/wingback and play at the top level at both club and international level for years to come.

TL;DR: He got dat dawg in him 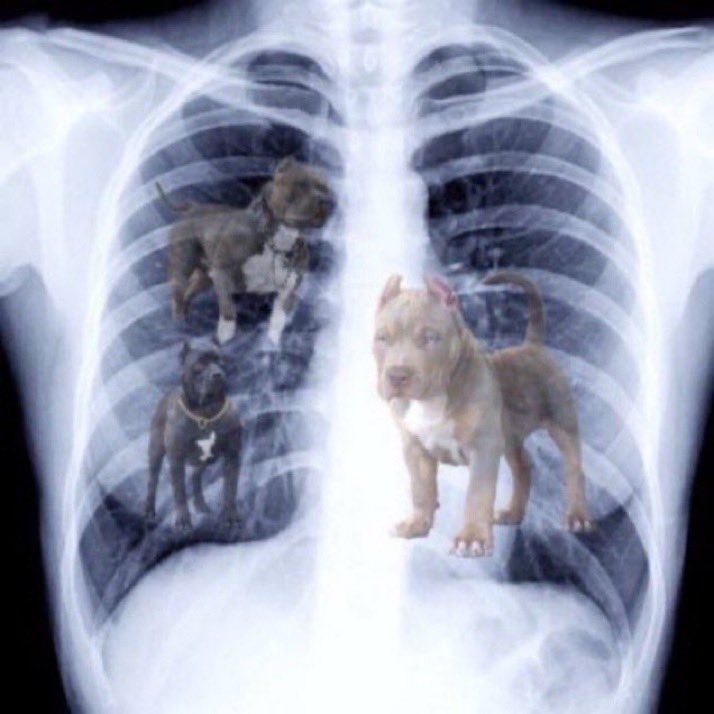