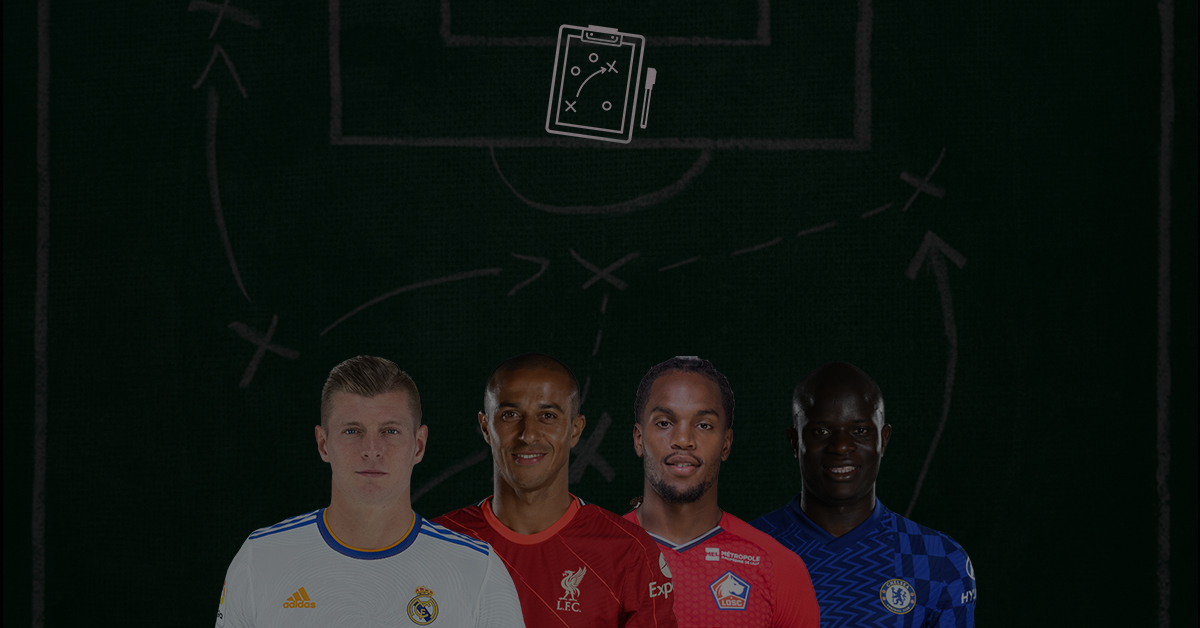 Football, at its core, is a really subjective sport to analyze. Other than the issues that come with judging individuals in a team sport, the complications of understanding if a player is good or bad are plenty and can probably never be stated outright in that form. But that doesn’t mean we stop rating players, does it? There is assessment going on, regardless of the difficulties in assessment. Often, the judgment comes down to – is a player doing what he’s supposed to and doing it well? Which then demands the understanding of what he/she is supposed to do, which in turn leads to the demands of understanding team tactics and instructions of other players. It’s not an easy process.

But today, I’m going to try and make that process a little easier. I’m going to classify Europe’s top 5 leagues’ midfielders into roles and rank them on the basis of how well they performed that role last season. I’ll explain the methodology below, and then open up a request line on Twitter, for anyone to be able to ask for a specific player’s role rank chart. Let’s get into it.

I’ll spend more time explaining the midfield roles, since they are key to the results. The 5 roles I’ve decided to classify midfielders into are:

As you can see, I’m a huge fan of Football Manager. I just think they’ve nailed down names of player roles really well. They do have a few more, but I’ve decided to stick to these 5 for simplicity. An explanation of each role:

1. Deep-lying Playmaker: The midfielder tasked with progressing from deep. We’re looking at someone who is good at build up, involved in possession, spreads play well, dictates tempo and progresses from deep. Some of the stats that will carry high weightage are ‘Progressive Passes’, ‘Passes into final third’, ‘Pass completion %’, ‘Progressive Carries’ etc. Some good 21/22 references for players in this category would be Kroos and Verratti.

2. Defensive Midfielder: Initially I had named this role as ‘Anchor Man’ but it felt it was too reductive in function. The player most adept at holding, shielding the back 4 or 5, defending transitions and good positioning, makes it here. An aspect of retention and ball safety will also be focused on. Some stats that have been used are ‘% of dribblers tackled’, ‘Pressure Success %’, ‘Miscontrols’, ‘Pass Targets’ etc. References would be players like Busquets and Casemiro from last season.

3. Ball-winning Midfielder: The midfielder who operates with high defensive intensity, presses a lot, wins the ball back and is more about workrate and getting stuck in, than any technical aspects of the game, is covered here. Some high-weightage stats used for this are ‘Pressures’, ‘Tackles’, ‘Interceptions’, ‘Pass blocks’ etc. Good references for this role are Kante and Fred in 21/22.

4. Box-to-box Midfielder: I’ve covered players who love to join the attack in this one. These are midfielders who boast a high goal threat from midfield and routinely link up with attackers without much care for involvement deeper in midfield. Stats like ‘Carries into final third’, ‘npxG’, ‘Shots’, and ‘Dribbles’ have been focused on. References for this role are Naby Keita and Ilkay Gundogan of last year.

5. Advanced Playmaker: These might be slightly tricky to separate from box-to-box mids and deep-lying playmakers, but the reference here is of players who have high final third creation. Instead of deep playmaking, they focus on finding attackers regularly and have good rates for assists. Some focus stats for these players are ‘xA’, ‘Passes into penalty area’, ‘Key passes’, ‘Shot-creating Actions’ etc. Good references from 21/22 might be Luis Alberto and Rodrigo de Paul.

Well, that was all the theory. The rest is pretty much manual work.

Step 1: I downloaded stats of all outfield players from fbref.com

Step 3: I cut off all players who haven’t played at least 10 league 90s

Step 4: I create possession-adjusted and per 90 versions of each stat so that we can bring all the stats to a comparable level playing field

Step 4: I converted each stat into a percentile version within this data set. Eg. The midfielder with the highest ‘possession-adjusted per 90 xA’ gets 100 percentile for ‘xA’ and so on. One caveat here is that I am comparing midfielders across leagues for this exercise. So someone with a 90 percentile is better than 90% of Europe’s top 5 league midfielders on that stat, not just his own league. It’s the only way I can get a Europe level ranking.

Step 5: I used the role logic from earlier to come up with scores for each of the 5 roles. I’ve used 13 data points for each role and weighted them on the basis of which stats are more relevant.
Step 6: I use percentiles once again within the role scores to rank them, and then assign each player their best role based on the final percentiles.

The percentile scores indicate how good the midfielder is at that role. Eg. Kroos is the best deep-lying playmaker in Europe’s top 5 leagues based on 21/22 data, but two-thirds of the same midfielders are better than him for the ball-winning midfielder role. The 25 players in this list have a top 1 percentile score on at least one role.

Let’s look at the role wise ratings. Here are the top 25 players for each specific role.

Those were the best players in each role based on season data.

Now, let’s take a look at some player profiles that cover their score and suitability for each role. It’s the same data, but from a single player point of view.

The role scores that we calculated earlier, have been used to plot marks along the pentagon to show how good a player is at that role. As discussed before, Kroos claims the top spot for ‘Deep-lying Playmaker’ with a solid 100, but he also looks good for ‘Advanced Playmaker’ and ‘Box-to-box Midfielder’ which hints at what a good 21/22 he has had in terms of playmaking and driving the game. He looks decent on ‘Defensive Midfielder’ and is in the bottom third for ‘Ball Winner’.

Now, the data will only reflect what a player has done in 21/22 and not what he CAN do. If a player was played out of position or tasked with a different role, the chart will change accordingly. Frenkie’s best roles appear for ‘Deep-lying Playmaker’, ‘Box-to-box midfielder’ and ‘Advanced Playmaker’ which probably speaks of the various roles he has been asked to play last year. His low defensive output and shielding ability are clear from his inferior scores in the other 2 roles. 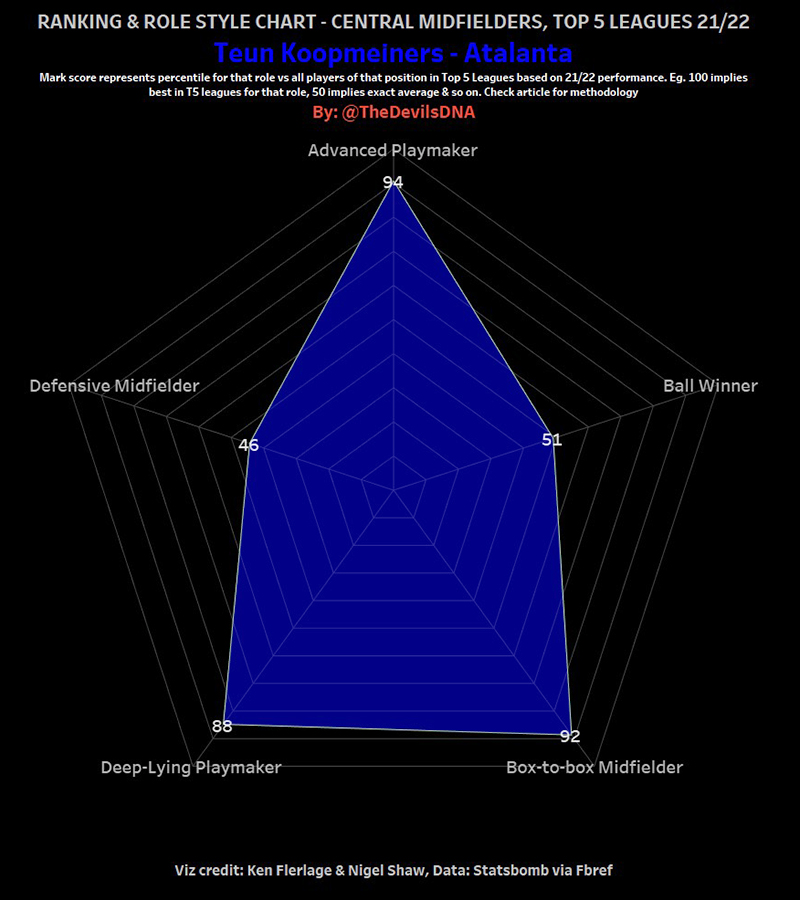 Koopmeiners was largely touted as a Defensive Midfielder prior to his move to Italy. While that tag is debatable, his usage at Atalanta has been anything but. He’s been deployed as an attacking midfielder or roaming #8 on many occasions, which is probably why his 21/22 stats look good for ‘Advanced Playmaker’ and ‘Box-to-box midfielder’ while also showing a good score for ‘Deep-lying Playmaker’.

A final example to end this article with a bang. Thiago Alcantara.

He progressed play, he playmaked, he won the ball back, he supported the attack, he shielded the defence – Thiago did everything in 21/22. There’s almost nothing to separate the 5 role scores. Thiago was the most well-rounded midfielder in terms of my calculations.

Well, that’s a wrap. I’ll be opening a request line on our Twitter handle after releasing this article. Comment with the name of the player you want to look at and I’ll RT with the pentagon-shaped role rank style chart like the 3 above.

If there is high interest, I might do a similar exercise for the other positions as well, but I’m not sure of the interest of 21/22 rankings since 22/23 has already begun.