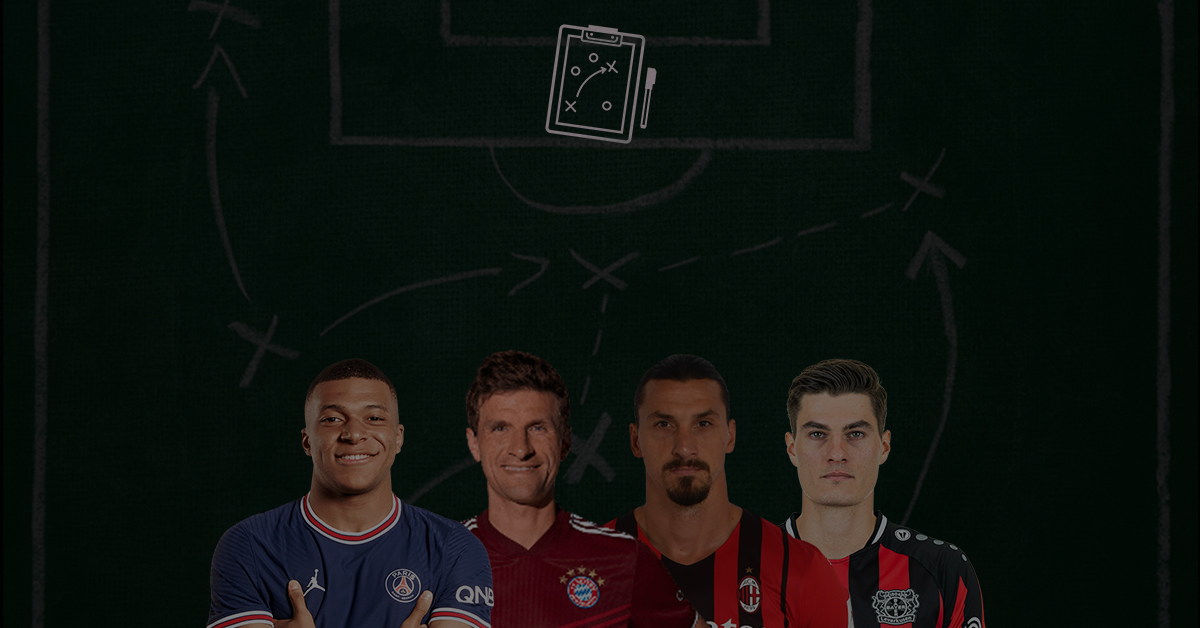 My previous article segregated all top 5 league midfielders into 5 playing styles and used their stats from 21/22 to rank them on each role. You can find the full methodology here and the tweet with the request line for the role rank charts here. The response to that was very positive, which is why I have decided to extend the same exercise for strikers using 21/22 data.

The choice for picking strikers as the next position to analyze was down to 2 things. One, people love strikers. It’s always been the case. They get the headlines, they score the goals and garner the attention of audiences more. Secondly, and more to do with my intent, strikers are the one position after central midfielders, that offer a vast amount of tactical variation. Teams use their last line attackers in various ways, offering the chance for a 5-way role segregation just like midfielders. Without further ado, let’s dive into it.

I’ll spend more time explaining the striker roles, since they are key to the results. The 5 roles I’ve decided to classify center-forwards into are:

Once again, the Football Manager influence is clear. Why reinvent the wheel?

An explanation of each role:

1. Target Man: The out-ball of the team – someone with aerial presence who can score, assist or hold up, when direct balls are purposefully launched at him by his teammates. The high weightage stats taken for this role were Aerials won, Aerial win %, Pass Targets, etc. Some examples of players who excelled in this role last season are Zlatan Ibrahimović, Christian Benteke and Chris Wood.

2. Poacher: The finisher – the one who plays off the shoulder of the last opponent defender, continuously looking at running behind, finishing from as close to the goal as possible and offering constant penalty box threat to push defences behind. The focus stats here are NPxG, NPxG/Shot, Penalty area touches, etc. Some examples from 21/22 are Erling Haaland, Patrick Schick, and Ciro Immobile.

3. Deep-lying Creator: A striker acting as a creator for others. Whether as a deep-lying forward or false nine or wide forward, this player has a sense of assisting and helping others score, in addition to scoring himself. Some key stats taken for this were xA, Passes into penalty area, Shot-creating actions etc. Players who played this role well last season were Alassane Plea, Thomas Muller, and Max Kruse.

4. Explosive Dribbler: A forward who loves taking on defenders – whether it’s by drifting wide to isolate and dribble past defenders, or by dropping deep into midfield to drive towards the goal. High weightage stats for this were Dribbles, Players dribbled past, Shots created from dribbles etc. Players who topped this role in 21/22 were Kylian Mbappe, Rafael Leao and Emmanuel Dennis.

5. Defensive Forward: It might sound like an oxymoron, but modern football has found a place for an attacker who begins the team’s defense from the front, by pressing and ball-winning high up the pitch. Key stats for this included Pressures, Attacking 3rd tackles, Pressure Success %, etc. Some of the examples from 21/22 for this type are Amine Adli, Roberto Firmino, and Mark Uth.

Well, that was all the theory. The rest is pretty much manual work.

Step 1: I downloaded stats of all outfield players from fbref.com

Step 3: I cut off all players who haven’t played at least 10 league 90s. 220 players made the cut and this becomes the roster we will do all our calculations on.

Step 4: I create possession-adjusted and per 90 versions of each stat so that we can bring all the stats to a comparable level playing field

Step 4: I converted each stat into a percentile version within this data set. Eg. The Striker with the highest ‘possession-adjusted per 90 xA’ gets 100 percentile for ‘xA’ and so on. One caveat here is that I am comparing strikers across leagues for this exercise. So someone with a 90 percentile is better than 90% of Europe’s top 5 league strikers on that stat (i.e. Only 22 strikers performed better than him for that role) not just his own league. It’s the only way I can get a Europe level ranking.

Step 5: I used the role logic from earlier to come up with scores for each of the 5 roles. I’ve used 13 data points for each role and weighted them on the basis of which stats are more relevant. Another caveat here is that since these are based on actual stats, they are highly dependent on what role they were deployed in and to an extent, how the team helped them perform that role as well. In a different setup, or in a different role, they could have very different stats, and, as a result, very different role rankings.

Step 6: I use percentiles once again within the role scores to rank them, and then assign each player their best role based on the final percentiles.

Let’s look at the role wise ratings. Here are the top 25 players for each specific role.

Those were the best players in each role based on season data.

Now, let’s take a look at some player profiles that cover their score and suitability for each role. It’s the same data, but from a single player point of view.

Haaland is viewed as the quintessential poacher, and the data backs it up. He scored the highest in Europe for that role. His next best scores are for deep-lying creator and target man, 72 percentile on each. This means that 28% of strikers, or 62 strikers of the 220 in our dataset, are better than him for these 2 roles.

Funnily, that looks like the eiffel tower. Jokes aside, Mbappe topped our set for explosive dribbler, which isn’t a surprise for anyone who has followed his game, but he also ranks very highly for poacher and deep-lying creator, highlighting his strengths at those roles. But that comes at the cost of his scores in the other 2 roles, which are a result of him being a poor target man and not being a great defender from the front.

Muller sneaked into the set as a ‘Support Striker’ as per Transfermarkt. His traits and play style from a deeper area are reflected in his high scores for defensive forward and deep-lying creator, given his high creativity to provide for Bayern’s front 3 and involvement in pressing and ball-winning in deeper areas.

Finally, I’m posting Ronaldo, because I’m pretty sure I’ll get a request for it.

Ronado’s fall from grace and difficulties while playing for United last season are apparent. Even for his best role as a target man (largely due to his aerial strength, which he now relies heavily on), 27% strikers, or 60 players, performed better than him. The other roles are even worse, with his poor defending assigning him a 4 percentile as a defensive forward.

Well, and that’s a wrap. I’ll be opening a request line on our Twitter handle after releasing this article. Comment with the name of the player you want to look at and I’ll RT with the pentagon-shaped role rank style chart, like the 4 above.

If there is high interest, I might do a similar exercise for the other positions as well, but I’m not sure of the interest of 21/22 rankings, since 22/23 has already begun.