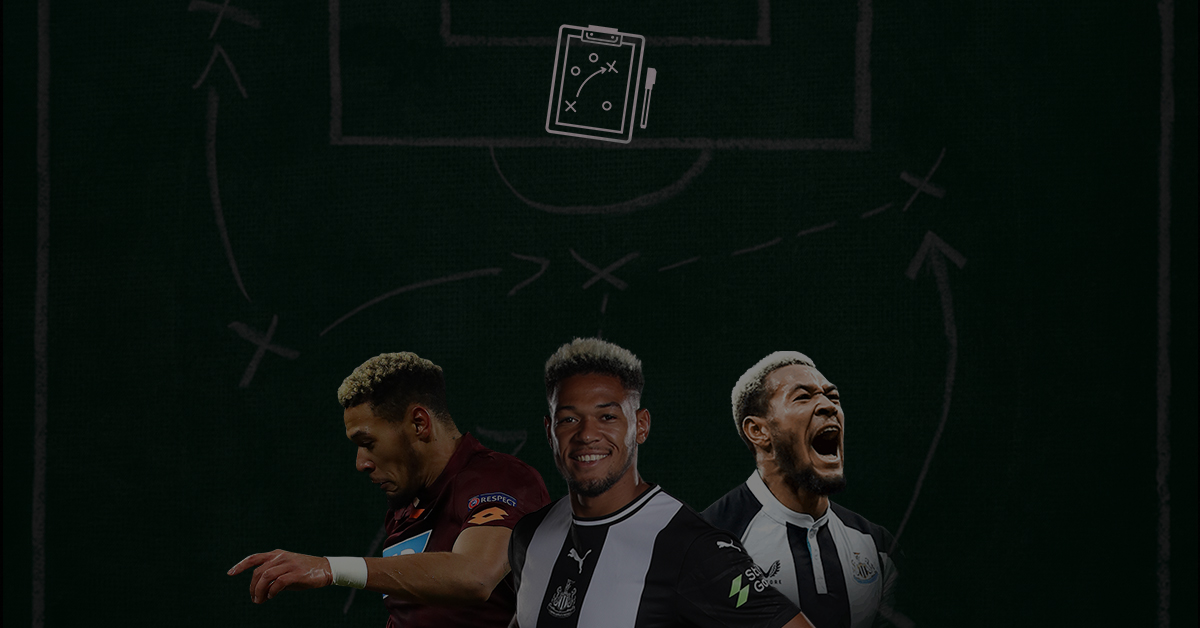 Let’s roll back a few years into 2019, the pre-pandemic year where everything was just perfect. Newcastle, at that time, were struggling for PL status having been relegated in the recent past only for Rafa Benitez to bring them back up and arguably overachieve with the resources at hand and keep the Toon afloat in the PL. It was not a secret that Newcastle fans were fed up with Mike Ashley and his ‘lack of ambition’. So, when Steve Bruce replaced the club favourite, Rafa Benitez, there was already a heavy backlash that followed. Newcastle needed to win the fans over and the way the owners responded was by splashing a club record fee of £40m on Joelinton from Hoffenheim.

Steve Bruce initially signed the Brazilian with the intention of playing him as a striker. Indeed, that was his actual position if you look at the season he had at Hoffenheim scoring 7 goals and contributing 5 assists. Not exactly great, but Newcastle were struggling a bit during that time so it was still a good signing all things considered.

So, 5-4-1, Joelinton as the lone target man, low blocks, Saint-Maximin and Almiron running down the wings, the plan was perfectly clear. It cannot get more Steve Bruce than this if you tried. The only problem was that Joelinton struggled to play as a target man. He just could not score enough goals and contrary to what Liverpool fans would tell you in 2020, a striker’s job IS to score goals. Especially if you are a club’s record signing and one of the few goalscoring threats in the squad.

This trend continued, Joelinton never really got firing playing as the striker. Managing to score a grand total of 2 goals in 2019/20. So much so that Newcastle had to sign another striker in Callum Wilson to compensate for their lack of goal threat. Joelinton then got shifted out wide after the arrival of Callum Wilson in 2020. But, the Brazilian’s fortunes did not change and he would still struggle to find the net on a consistent basis. And that would be a constant feature under the leadership of Steve Bruce.

Now, we all know what happened at Newcastle United last year with the *slightly* controversial takeover. Steve Bruce was sacked and Eddie Howe was appointed as his replacement in November 2021. Joelinton was always ever present in the starting lineup under Howe but what happened during the match against Norwich on 1st December changed the course of history. Ciaran Clark was sent off in the 9th minute and Howe had to shift Joelinton from the wide forward position to the midfield and seeing his performance was equivalent to discovering fire for the English manager. That was the start of a remarkable, unlikely and highly unorthodox role and position change. And the rest, as they say, is history.

So, how has the Brazilian managed this highly improbable transition from being a striker to essentially into a ball-winning midfielder? We’ll have a look.

The credit for Joelinton’s redemption arc somewhat goes to Ciaran Clark. No red card in that game, no Joelinton in midfield, blah blah blah, you get the idea. In fact, he was so successful as a midfielder that he managed to keep Newcastle’s star signing in January, Bruno Guimaraes, out of the starting lineup for the first weeks. Joelinton started lining up in a 3 man midfield alongside Jonjo Shelvey and Joe Willock, also known as Jonjo-JoeJoe. Eventually, Bruno came into the lineup replacing either Willock or Shelvey while Joelinton became a midfield mainstay, a fantastic turnaround from once being dubbed as the worst signing in PL history.

If we take a look at his numbers, we can actually see that the 26-year-old Brazilian always had a bit of a midfielder inside him all along. His attacking numbers are not great. Pretty poor in fact for someone who is a striker. However, his defensive numbers were incredible for an attacker.

As you can see, he ranks in the 22nd percentile for goals scored by forwards in Europe. Not only that, all the rest of his stats are subpar for someone who was brought in as a striker. However, you look at the defensive side of his game and it’s a whole different story altogether. He is among the best in Europe in terms of the defensive side of forwards.

If we roll the days back to his time in the Bundesliga, we can get a clearer picture of just the type of player that Joelinton was under Julian Nagalsmann at Hoffenheim. Joelinton usually lined up as the deep-lying forward in a 2 man strike force. Nagalsmann always appreciated Joelinton’s physicality, tenacity and work rate. So, Joelinton’s traits have not changed at all.

“He has a tactical understanding and the technical capabilities,” Howe said. “He’s been brilliant defensively. His work rate and the amount of ground he covers is incredible. He’s a real team player.”

Joelinton has always had the underlying numbers for a deeper lying forward ever since his days at Hoffenheim. His defensive side of the game for a forward has always been among the best in Europe. However, his transition from a deep-lying forward to a ball-winning midfielder is pretty incredible. Prior to Howe, Joelinton had never started any match as the no.8 for Newcastle. And, the Brazilian had started only one match in the midfield in his whole career spanning 223 appearances, for Rapid Wien vs Austria Vienna. He was sent off in that match in the 67th minute.

Another thing to notice from the pizza chart of his Hoffenheim days is that his passing and possession numbers are also good. Of course, as always, Joelinton the forward has never had good goal scoring numbers. But, his overall game is vastly different from his numbers at Newcastle. It depends on a lot of factors, his role, Hoffenheim’s system, the league’s susceptibility of leaving open spaces, but this does prove that Joelinton is able to progress and pass the ball as well. So, he is specifically being used as a ball-winning midfielder by Eddie Howe. It probably might be the weirdest position and role change of all time. From a target man to a ball winning midfielder. That’s equivalent to Didier Deschamps asking Karim Benzema to do Kante’s job. Although, I wouldn’t put it past the French manager.

This viz confirms our previous analysis. Joelinton is among the very best in terms of defensive actions. But, just having good defensive numbers doesn’t automatically mean that you are a good midfielder. Joelinton’s other attributes such as his tactical understanding and other traits such as his work rate, tenacity and determination which made him a good defensive forward are what helped him in this transition. The Brazilian has also partnered with a data analysis firm from Brazil to help improve fast track his transition into a midfielder. All this, coupled with Howe’s excellent coaching and Newcastle’s system has helped Joelinton transform into a midfielder, and he’s currently thriving in that role.

The Brazilian forward-turned-midfielder now regularly forms a duo with his compatriot Bruno Guimaraes in the midfield for the Magpies. The Brazilian duo have formed a formidable partnership in the middle of the park with Joelinton offering bags of energy and winning the ball back while Bruno offers the calm and composure of a traditional deep-lying playmaker. Both of them complement each other well and have been crucial in the upturn of Newcastle United. Only Manchester City, Liverpool and Tottenham have earned more points than Newcastle since Howe was appointed as the manager. Howe has struck a good balance between his attacking and defensive structure at Newcastle as he prepares to transition a team designed around being the ultimate underdog into his philosophy and ideas. Newcastle’s midfield isn’t as easily getting bypassed as it was being done previously and they have improved tenfolds in attack as well. There is still a long way to go before Newcastle go where everyone expects them to go but Howe has proven his worth as the right man for this job. And decisions such as Joelinton’s position change only helps his case.

The credit, along with Howe, goes to Joelinton for studying and adapting his game to suit his new role. It is one thing for a coach to identify a role for a player, it is totally different for a player to perform well in that role. So much so, that any plans that Newcastle may have had at signing another midfielder to support Bruno Guimaraes must have been totally scrapped off with the way Joelinton’s been playing.

The Brazilian ‘midfielder’ is the prime example of how scouting should be done. The underlying numbers were always there of his ability to play in the midfield. Joelinton was largely misprofiled by Steve Bruce where he used him as a lone forward whereas his strengths always lay in playing a deeper role. Credit to Eddie Howe for recognising the 26-year-old’s best position, and credit to Joelinton for adapting to his new role like a duck to water. The Newcastle fans used to hound Joelinton earlier. Now, they couldn’t possibly love him more.