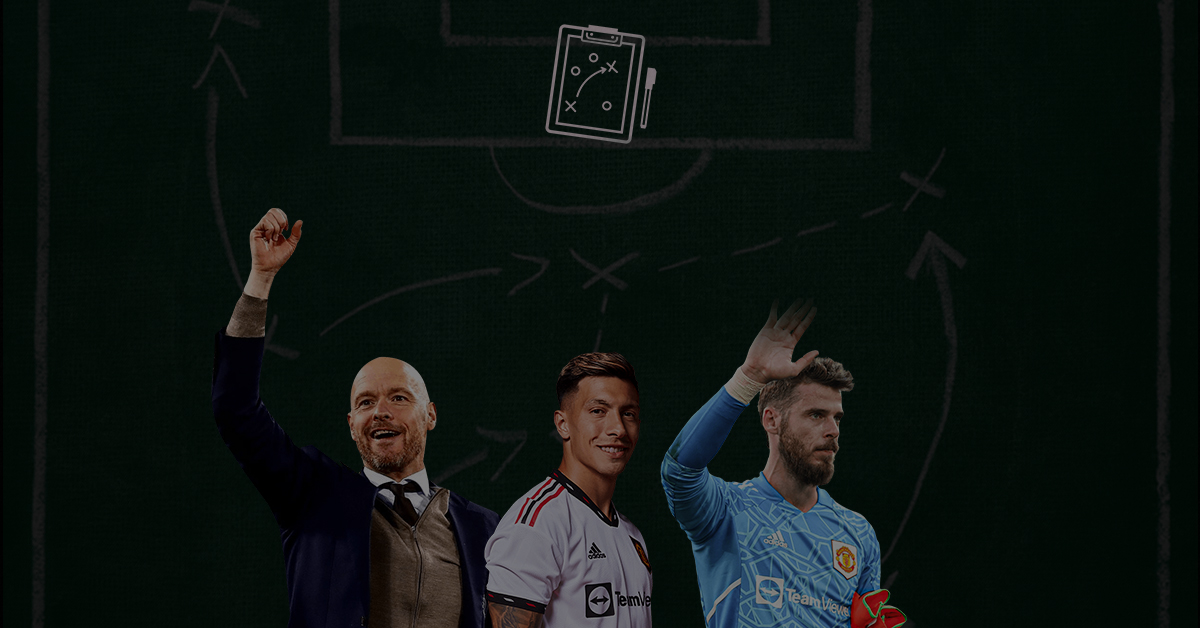 After a rude invitation to Premier League football in his first 2 games in charge versus Brighton and Brentford, Erik Ten Hag has steadied the ship at Manchester United. With 4 wins in 4, including emphatic victories against Champions League spot rivals Liverpool and Arsenal, Ten Hag seems to have brought back confidence, intensity and hope to his players and the fans as well. But, it has to be said, that this has come at the cost of sacrificing some principles of play that Ten Hag strongly believes in. This is not his ideal gameplay, and definitely not something he will be looking to repeat the next time the side meets the same teams half-a-year down the line.

In this article, I’ll first explain the current gameplan that Ten hag has used to steady the ship and why he has chosen certain players above others and then go into the long-term limitations of the tactic.

Let’s first look at the formation being used in the last few games. There have been no major changes to this lineup in the 4 victories.

Antony started the previous game against Arsenal, and it’s a good assumption that he’s going to be started at RW from now on, given how clearly Ten Hag mentioned about the balance Antony provides to the attack as a wide outlet on the right was important to the team. Also, goes to show how another manager believes that Sancho’s best role is on the left, something we’ve been banging on for more than a year now.

Anyways, to understand the current gamepan, like all good football tactical breakdowns, we start at the back. I had posted the the same tweet on our handle a while ago, and this is a good starting point:

After the debacle of the first 2 games, Ten Hag has instructed de Gea to go long instead of attempting short build up. This is probably the biggest sacrifice Ten hag is making on his usual gameplay ideals, and everything else largely flows from here. As a result of going long on most occasions, the whole team bypasses the build up phase, which is currently a weak area for United, and engages in 50-50s higher up the pitch. The idea is to win the first ball or second ball and then force transitions quickly to catch the opponent defense line off-guard. Out of possession, the idea is to drop deeper and engage in a lot of reactive or last-ditch defending, with a heavy focus on intense pressing in the middle and defensive areas instead of higher up the pitch, where United doesn’t have good high pressers.

It’s a gameplan that suits United’s current players and a lot of the team selections make sense based on this understanding. Raphael Varane is one example. After the dropping of Harry Maguire, Varane has come in and done well. That’s largely because he is very suitable for the type of last-ditch intense defending that the current gameplan requires. If dropping deep and heading away crosses or putting pressure on strikers to dribble past is the only requirement, Varane is good. But it has to be noted that Varane totals just 4 progressive passes in the 4 games he’s played – an average of 1 progressive pass per game. This weakness has been masked thanks to the choice of ignoring short build up. If build up and a high line possession game are not the requirements, then Harry Maguire’s importance reduces and Varane’s increases. It’s a smart reading of both player’s strengths from Ten hag.

The same logic extends to Tyrel Malacia over Luke Shaw. Shaw was key to progression from the back under Ole gunnar Solskjaer and regularly topped the progression and chance creation charts in the last 3 years. But his defending, especially in the sense of intensity, has always been a question mark. Too often, he lets opponents dribble past or run past easily. This is where Malcia is strong. While he doesn’t have the technical skills of Shaw, he’s a very intense player who makes it hard for his man to get past. He’s also really good at pressing opponents in midfield areas once he inverts there. In fact, Malacia averages 13.3 pressures per 90, which is the second highest in the squad after Scott McTominay for all players who have played at least 3 90s.

Without explaining much, the same logic also holds good for Scott McTominay. If winning second balls and making a nuisance of yourself is the goal, Scott is a very good option. He’s been instrumental in breaking play both on the ground and in the air (the latter being one big reason he is starting over Fred) and laying it off to a more technical partner in Eriksen or Dalot or Bruno. Rashford is another one who thrives off a transition-based steal-and-run system where his off-the-ball pros are maximized and his hold-up and creative cons are minimized.

In summary, most of Ten Hag’s current selections center around good defending, intensity and effort, which other than a tactical gain, also promote a few mental directines like ‘never giving up’, ‘outrunning the opponent’, ‘fighting for every ball’ etc. It has worked well, but it has its limitations long-term.

The limitations of this approach

United have been ceding a lot of possession with this gameplan.

The possession drop from the first 2 games is clear. While possession isn’t everything in football, it is a measure of control over the game. Ten Hag would ideally want his team to have more of the ball. The short build up would ensure United build attacks on their terms, move up the pitch in the pace they want without fear of conceding a counter, and have the authority to position players where they need to defend when the opponent does steal the ball, hopefully in a higher part of the pitch farthest from goal. If United’s opponents sit back in a more disciplined manner to not allow spaces for the forced transitions to work, then it might become easy for them to defend and hit the Red Devils on the break. We must also remember that 2 of these wins have come against big teams against whom such an approach usually works well (Did someone say Ole ball? No? Okay).

No matter how good the back 4 and Scott McTominay are at ball-winning, there is a risk in dealing with counters and 50-50 situations. We saw Eriksen getting mugged by Arsenal in a goal that was disallowed recently, while Maddison and Barnes did have some inroads around the midfield pivot in the Leicester game. Malacia and Eriksen struggled to deal with Saka’s threat on their side in the last game. On a different day, these are moments that could have led to troublesome situations.

So far, the intensity and freshness of playing under a new manager and the good start of the new signings Lisandro Martinez, Christian Eriksen, Tyrell Malacia and Antony, has kept the playing tempo good and ensured we are winning more second balls than not. But this can’t be the long-term vision. The worst-case scenario of such a gameplay would be defenders losing form and confidence if they concede too many transitions – an effect we have already seen on Harry Maguire last season. Being a defender in a team where the attackers don’t press and midfielders aren’t great at shielding is a nightmare. Ten Hag’s structures in pressing and defending are ensuring the pressure on the defenders isn’t as bad as last season. But it’s all hanging by a thread. United have already allowed 64 passes and 16 crosses into the penalty area so far, both of which are the 4th highest in the Premier League. We are allowing a lot of inroads into our penalty box and are hanging on thanks to the last-ditch defending of the current back 4. It’s not a sustainable approach to defend, especially for a team that’s aiming for trophies.

The ideal gameplay is to control the game enough to not have to face transitions and build play and progress in a way that is able to break down all kinds of defences. Defence and attack have to work in unison. The way the team keeps the ball and progresses to retain it as high up the pitch as possible is also the way in which they defend, once they lose the ball as far from their own goal as possible, and make it tough for opponents to traverse that space and enter their area. That is the ideal tactical heaven Ten Hag will aspire to reach soon, and the current gameplan is far from it.

I don’t want to seem like a person who brings up issues without solutions, especially when the team is actually going through a good phase. In a follow up article to this, I will explain the tactic I feel Ten hag will move towards and the personnel changes and transfer requirements that will follow as a result of it. Who knows? We might even see that change tonight against Real Sociedad.

For now, Ten Hag needs to be credited for this inspiring comeback after 2 disastrous games. He has turned things around, got points on the board and got the players and fans buzzing for more. But somewhere in his mind, and possibly the training pitch, he must already be planning for a tactic that is more front-foot, progressive, proactive and suitable to get Manchester United to being a top club competing for titles.