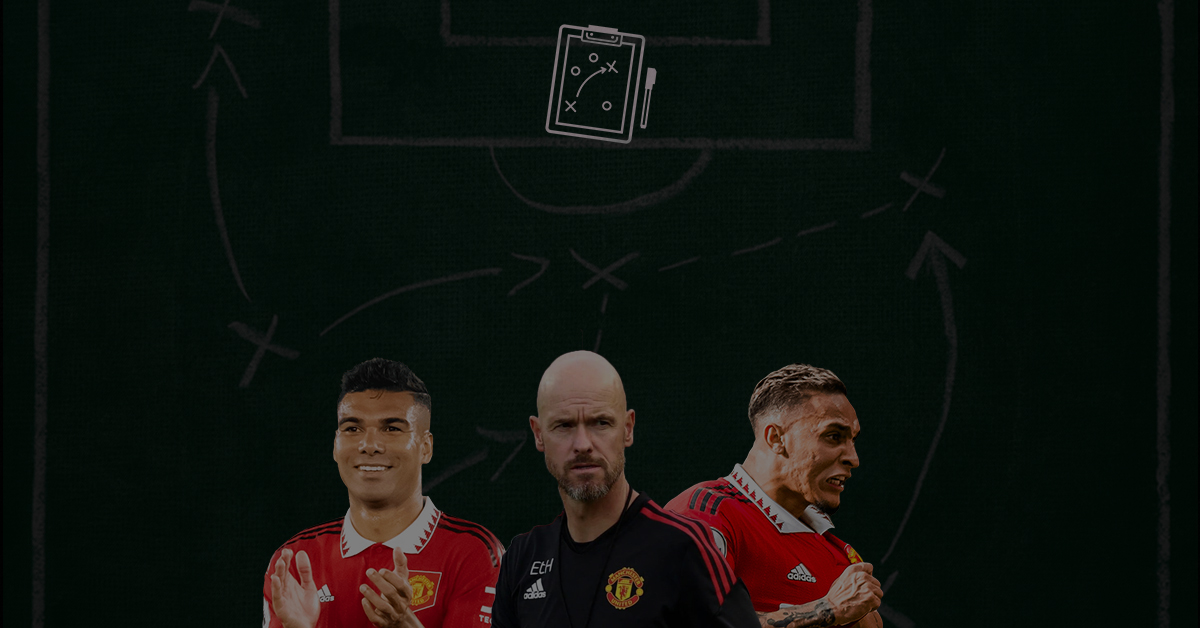 In my previous article here, I explained the tactic Erik Ten Hag has relied on after a disastrous start to his Manchester United career – a gameplan that has got United 4 wins in 4. But, that came at the cost of sacrificing many principles of play that make Ten Hag who he is and have the potential to make United a title-winning team. In all 4 games, United bypassed build up to go long, conceded possession and invited 50-50s and entries into their penalty box, with the hope of defending intensely and hitting their opponents on the break. It has worked, but the long-term sustainability of such a tactica doesn’t seem promising.

In this article, I’m going to go a step ahead and wear my problem-solving hat. I will take a swipe at predicting the gameplan and XI that Ten Hag will move towards at some point in the near future and give some reasons for it.

The playing XI that United need

I’m straight up just going to post my predicted XI and then explain the logic.

As before, it all starts at the back. Martin Dubravka isn’t the best goalkeeper in the world – far from it. But his best trait just so happens to be – distribution. This is probably Ten Hag’s biggest demand from his keeper and the major requirement to pull off a short build up tactic. It’s also something De Gea is dreadful at. A temporary relief until Dean Henderson or a new goalkeeper takes over in the summer of 2023, Dubravka, at the very least, can help Ten Hag start playing out from the back in a measured and controlled manner, instead of booting the ball away aimlessly, like De Gea currently does.

As explained in the previous article, Harry Maguire and Luke Shaw are weak when it comes to defending transitions, but if their team bosses most of the possession and focuses on short build up and progression from the back, their technical attributes are big pros to have in the team. I’m still skeptical about Maguire turning it around and making it back to the Premier League XI, especially at RCB, where he isn’t as effective as LCB. The cameo against Arsenal highlighted his low confidence, while his performance against Sociedad, although positive, didn’t see enough progression (ony 2 progressive passes), which has been a recurring theme since his switch to the right side. Which is why, Victor Lindelof, who in my opinion came out of a wretched 21/22 as one of the few who could hold his head high, could also make it at RCB. If progression is a need from the center-backs, as it has been for all staple Ten Hag teams, Varane isn’t well suited. The RCB issue also has the potential for needing a whole new center-back once again, if none of these 3 options are deemed worthy by Ten Hag within a year. A return for Jurrien Timber or a similar progressive RCB isn’t out of the question, given the importance of playing out the back for Erik Ten Hag’s ideal approach.

Coming back to the predicted XI, the midfield puzzle is a lot more complicated. Eriksen’s importance to build-up play has become vital. There’s a reason Ten Hag is starting him in every game and not taking Eriksen off, until it is impossible not to do so. Eriksen is the only midfielder technically good enough to drop deep, receive and progress well. We saw against Brentford, that even when it comes to build up, Eriksen can go wrong, while the Dane’s defensive struggles have also been apparent, like against Arsenal. But nevertheless, he’s what we have in the name of a build up midfielder, so our reliance on him looks set to continue until we sign a proper deep-lying playmaker. This was why the summer 2022 window chase for Frenkie De Jong was vital.

Casemiro’s presence doesn’t solve the build up issue, but it gives the team a high amount of defensive security in transitions. This could also be another reason why Maguire and Shaw might be able to breathe easier compared to the leaky Fred-McTominay pivot. I predict the midfield to line up in a DM triangle with Casemiro at the base. During build up, Eriksen and Casemiro might drop on either side to take care of progression, while Bruno stays ahead. As the ball progresses up the pitch, Eriksen moves ahead and Casemiro drops back to a central anchorman role, to be ready for the defensive transitions if and when the team loses the ball up the pitch.

This movement is something Casemiro would be very familiar with, having done the exact same on many occasions with Toni Kroos and Luka Modric in the last few years at Real Madrid. Another reference to this movement is the De Jong-Schone pivot from Tan Hag’s 17/18 Ajax team where De Jong would drop for build up with Schone staying ahead, and the pair exchanging positions as the ball progressed up the midfield. The game against Sociedad saw a glimpse of this system for 45 minutes when Eriksen and Casemiro were on the pitch. The pair dropping deep during build up might make one call the shape a 4-2-3-1 as well, but formation notations are usually based on the shape in which a team defends in and considering Casemiro might slot as a central DM during defence, a 4-3-3 is the name being given here.

The last piece involves Anthony Martial. This one is a lot more flexible since Rashford is in good form and neither player really screams ‘Ten Hag CF’ anyway. But if a more possession-centric approach that requires hold-up, intricate passing and secure carrying from the CF is the aim, then Martial is probably a better bet than Rashford or Ronaldo. A lot depends on fitness and form, though. Antony’s wide outlet role and Sancho’s playmaking strengths when narrow, could work well in tandem, as long as the front 4 also focus on making constant runs into space, which is a gap the team has as a whole and could dictate the need to involve Rashford and Elanga a lot. 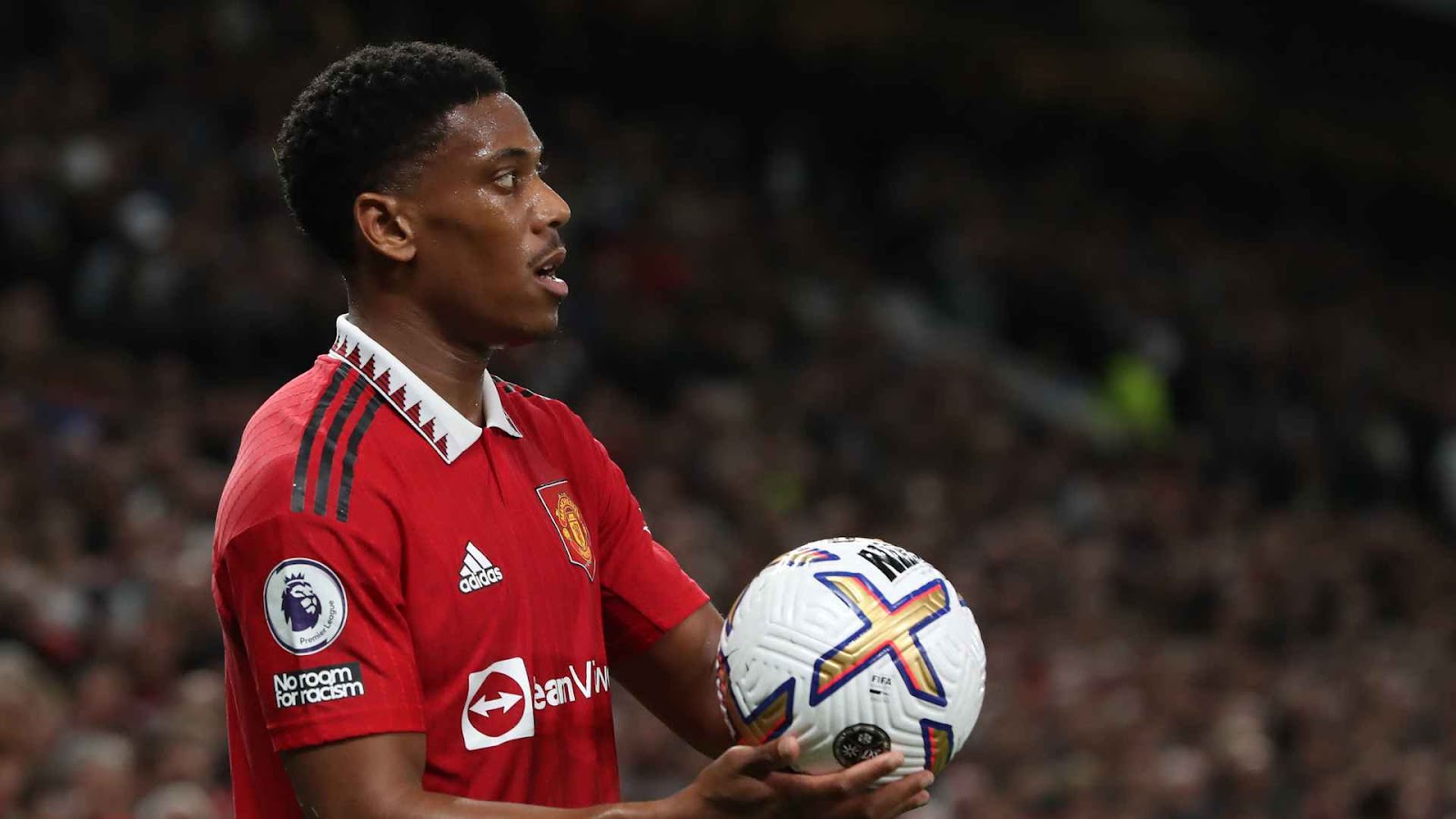 The tactic does have some gaps. The clearest 3 are GK, DLP and CF. Dubravka, Eriksen and Martial are temporary placeholders for 3 roles that each need a much better player. In the worst case scenario, even RCB could be an issue, if Maguire doesn’t recover form and Lindelof and Varane aren’t deemed good enough for the progression needs.

When might Ten Hag go for this change in tactic? It’s hard to predict. We’ve already seen some elements of play being trialed for one half vs Real Sociedad. It could be kept as a cup tactic, until the confidence to switch to the same in the Premier League is built. Ten Hag could utilize the current break or the upcoming international break in September or maybe even the World Cup in the winter, to get some time to train for it. It’s also entirely possible that he simply waits until he gets the ideal components for the system. As mentioned, at least 3 roles in the 4-3-3 are forcefits in terms of profile or quality. It’s very possible that he would want a few of them to be addressed in the winter window or summer 2023, before moving towards this setup.

In either case, the current setup, as amazing as its productivity has been, doesn’t feel like the long-term tactic Ten Hag envisioned when he took over the club. The philosophy sacrifices being made for the current results will be eating him up in some corner of his brain. It’s not the approach he had in mind when he made comments about the end of Liverpool and Manchester City’s eras. I feel Ten Hag will move towards a more high-line, short build-up and progressive setup in the near future. When that future is, entirely depends on how the players react to both tactics and how Ten Hag is supported in the market.